The Time I Crossed Paths with a Modern Day Huck Finn

Riverman is the April pick for the Outside Book Club. You can learn more about the book club here, or join us on Facebook to discuss it.

In the summer of 1999, Richard Perry Conant, age 48, quit his job as a janitor at the VA hospital in Boise, declaring himself fed up with the Clinton impeachment indulgence and maybe modernity itself. Before leaving town, he stashed some frozen fish in the attic of the house he’d been renting, a stink bomb on delayed fuse. Then he drove to Yellowstone National Park, where he spied elk, goats, buffalo, and—on the Blacktail Plateau, amid lush meadows—a black bear. Finally, he went to Walmart and bought a canoe, which he launched near the border of Montana and Wyoming. Destination: Gulf of Mexico.

I met him 15 years later. In my day job as a journalist, I’ve seen more than enough stunts, and had Dick Conant’s peculiar voyages come to my attention by way of a press release, touting yet another attempt at some kind of arbitrary “record” in a postmodern world lacking authentic frontiers, I might have dismissed or ignored it. But he found me, as he did countless others, purely by accident—at the foot of my street, in a small town on the west bank of the Hudson River, 20 miles north of Midtown Manhattan. His current mission, or so my neighbor told me, was paddling a canoe “from Canada to Florida.” I glanced at the vessel parked near the seawall: it was red, made of plastic, and packed as if for the apocalypse, with army surplus duffels and tarps and trash bags. And then there was the skipper himself: dressed in bib overalls, muddy brown boots, sporting a patchy, rust-colored beard, and laughing with great heaves of an ample gut. He called himself a snowbird—a retiree traveling south at the pace (more or less) of driftwood—and offered a handshake firmer than any I can recall.

It was Labor Day 2014, and I had my two-year-old son with me; I was off the clock. We soon said goodbye and good luck to the traveler, with a million or more questions unanswered, and it wasn’t until the next day, thinking again of my son and of the bedtime story that I’d let slip away, that I determined to chase Conant down. The Hudson where we live is two and a half miles wide—the Tappan Zee, a Dutch word for sea. On foggy mornings and during snowstorms, the distant eastern shore vanishes, and it’s possible, if you have a yearning cast of mind, to imagine that you’ve been marooned. What better illustration of the imaginative possibilities of life alongside a big river than the sudden arrival of a bearded giant from a distant land with a grip that could kill and a laugh as disarming as St. Nick’s?

I drove south to a marina near the George Washington Bridge, beyond which, I felt sure, I’d never find him. He’d be lost—ostensibly forever—in an urban mess of ferries and barges and bulkheads. Inside an office on the dock, I found a clerk and asked if she’d seen a hillbilly in a canoe. Blank stare. I tried elaborating on the nature and scope of Conant’s journey, such as I (barely) understood it, and she finally cut me off: “Some people have too much time on their hands.”

I was actually in a bit of a hurry—on the hook for daycare pickup duty in less than two hours. But I felt reasonably sure, from the clerk’s reaction, that Conant was still en route, so I began hiking quickly upriver, along a rocky trail. Raising a pair of binoculars after a couple of minutes, I spotted something colorful just beyond the nearest jetty, a few hundred yards ahead. It turned out to be a deflated Mylar balloon. 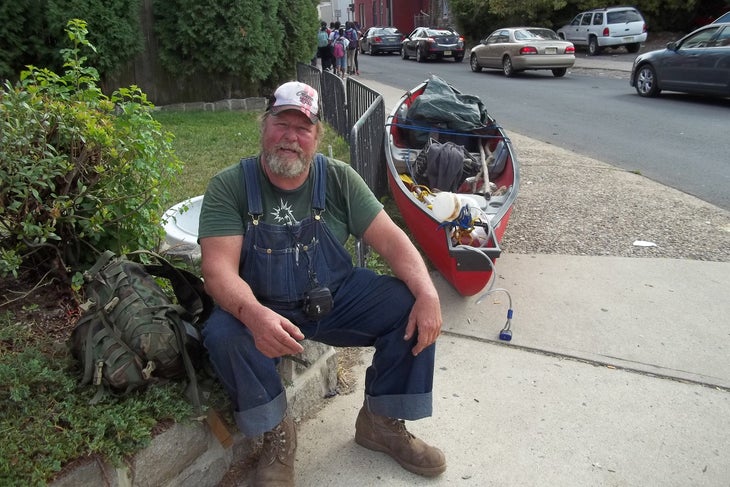 A computer printout in my bag proved that I wasn’t alone in my curiosity. It was from a six-year-old thread on a Texas kayak fishermen’s forum. “I thought your membership would be interested in the adventures of Dick Conant,” one post read. “Mr. Conant is paddling a dark green heavily loaded 16′ canoe along our stretch of the intercoastal waterway. He left Buffalo New York in early July, paddling alone.” Looking at the printout again, as I dithered, I was beset by a feeling of inadequacy. Conant had evidently made it all the way to Texas once before, from considerably north of where I now stood, sweating uncomfortably in 90-degree heat. If nothing else, he wasn’t the kind of person who gives up on a crazy idea.

So I trudged on, and after a mile, looking through the binoculars again, I spied the flash of a yellow paddle blade and a sliver of red bobbing in the ebb tide.

The post The Time I Crossed Paths with a Modern Day Huck Finn appeared first on Outside Online.

‘Corpse Bride’ or ‘Runaway Bride’? Here’s the Most Popular Wedding Movie in Each State