The Windy City has given a lot to the world: the Ferris wheel, deep dish pizza, Al Capone … but it’s only fair that Chicagoans have kept a few things for themselves. The Midwestern accent alone is tricky to decipher, but admitting you don’t know the meaning behind any of the city’s long-standing slang terms is akin to slathering your hot dog with ketchup. Get to know dese phrases, and you’ll be da best local in no time.

Want to look like a tourist? Go ahead: Pronounce it “CHI” (like chai tea). When referring to Chicago by its nickname, locals know to use a softer, “SHY”-town pronunciation. Need further proof? Just listen to the first 10 seconds of the 2009 song “Homecoming” by Kanye West, who grew up in the city.

Perhaps the most revered of all adjectives to a native Chicagoan is da, widely used in place of “the” (closely followed, of course, by dese for “these” and dose for “those”). Popularized by the Saturday Night Live sketches that showcase Chris Farley and fellow super-fans of “da Bears,” it’s the gateway word to anyone attempting a stereotypical Chicago accent.

Although Merriam-Webster defines dibs as “claim, rights”—as in, “I’ve got dibs on that piece of cake!”—the term has a much more specific application within Chicago’s city limits. Competition for street parking is intense year-round, but in the snow-filled winter months, the work it takes to shovel out a car makes people a touch territorial: They’ll place lawn chairs, crates, or even tattered suitcases in the parking spot when not in use as an act of calling “dibs.” But even before a Tribune columnist coined this specific meaning of the term in 1999, the bizarre move became an accepted—yet not officially sanctioned—practice after the 1967 blizzard, which pummeled the city with 23 inches of snow. To this day, it’s one of the city’s most controversial (and sometimes violent) traditions.

The custom of flying a white W flag to indicate a Chicago Cubs victory began nearly a century ago. According to the Chicago Tribune, after a hand-operated scoreboard was constructed at Wrigley Field in the late 1930s, operators would hoist either a W or an L flag—for wins and losses, respectively—to announce the outcome to those outside the stadium. Originally a blue flag with a white W, it changed to a white banner with blue lettering in the 1980s, and that’s the version that is still used by devoted Cubs fans who fly their W from fire escapes, flag poles, and garages after every successful game.

A colloquialism for “front room,” a frunchroom is the first space guests see when they walk in the house—usually the living room where families keep their nicest furniture and employ a shoes-off policy. Why the strange pronunciation? It’s just what happens when “front room” gets mashed up with a Chicago accent. 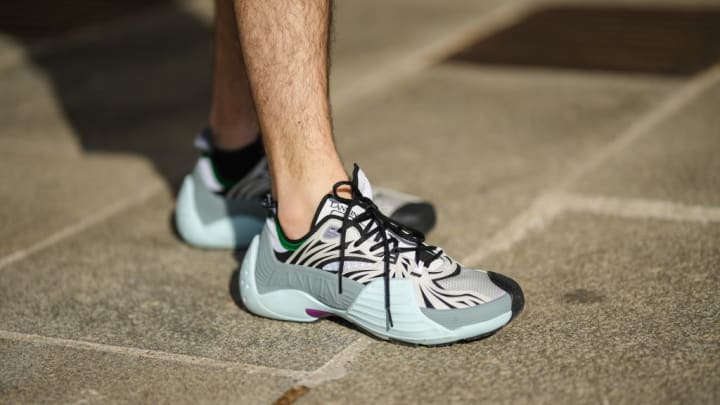 What would you call these? / Edward Berthelot/GettyImages

In the great debate of “sneakers” versus “tennis shoes”—in which the East Coast tends to use the former and a swath of the rest of the nation, including most of the Midwest, uses the latter—a third term for athletic footwear exists that is primarily employed by Chicagoans alone.

We’re not talking emeralds or rubies here. If someone mentions Jewels in Chicago or the surrounding suburbs, they’re referring to Jewel-Osco, a popular grocery chain with nearly 200 locations. 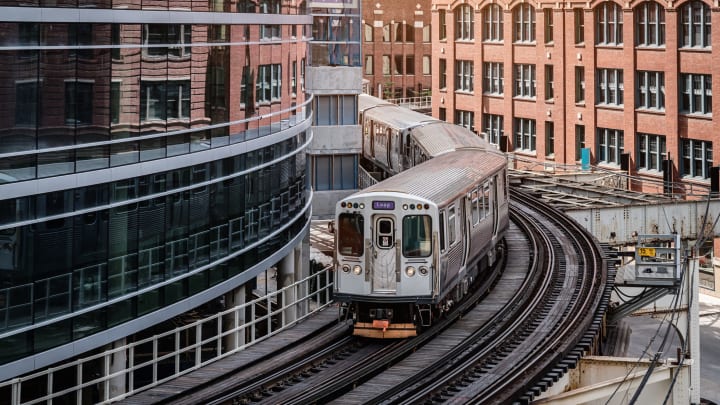 An L train heading to the Loop. / Mlenny // iStock via Getty Images Plus

The L is short for “elevated,” and refers to the train lines that run above the city streets of Chicago. It’s mostly used as an umbrella term for the entire Chicago Transit Authority public transit system, which also has trains that run at or below ground level.

One of nearly 80 Chicago neighborhoods, there are two theories for how the Loop—which refers to downtown Chicago—earned its name. Some believe it originated in the 1880s with the city’s cable cars, whose lines ended by looping around several blocks so that they could turn around more efficiently. However, according to historian Bruce Moffat, the term wasn’t used as a noun until the arrival of fellow slang term the L. This would mean that the Loop’s origins actually only date back to the installation of several elevated train lines, from 1892 through 1897, that converged and looped around this particular area. 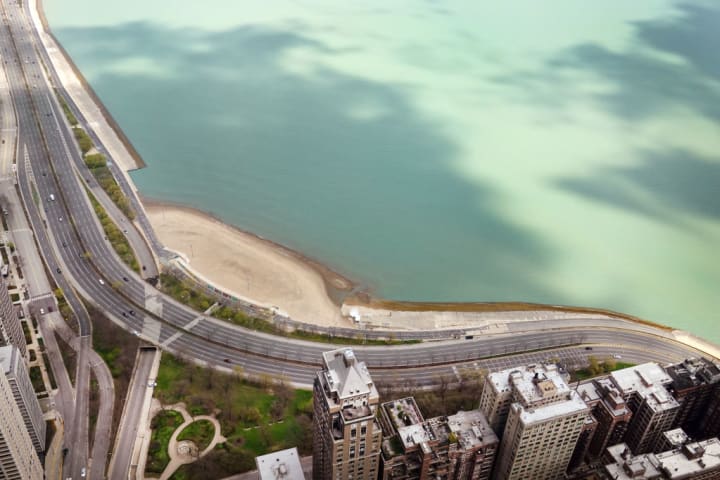 If someone in Chicago says they’re on LSD, don’t jump to conclusions: There’s a good chance they don’t mean they’ve taken a psychedelic drug (officially known as lysergic acid diethylamide). Instead, they’re probably just driving on Lake Shore Drive, an expressway that runs along the shoreline of Lake Michigan. Although it was officially renamed in 2021 to be Jean-Baptiste Pointe DuSable Lake Shore Drive, after the trader whose settlement led to the creation of the city, commuters still stick to the three-letter acronym when giving directions.

No, it’s not short for merchandise. In Chicago, if you bring up a situation and your friend says “merch,” what she’s really saying is, “prove it.” 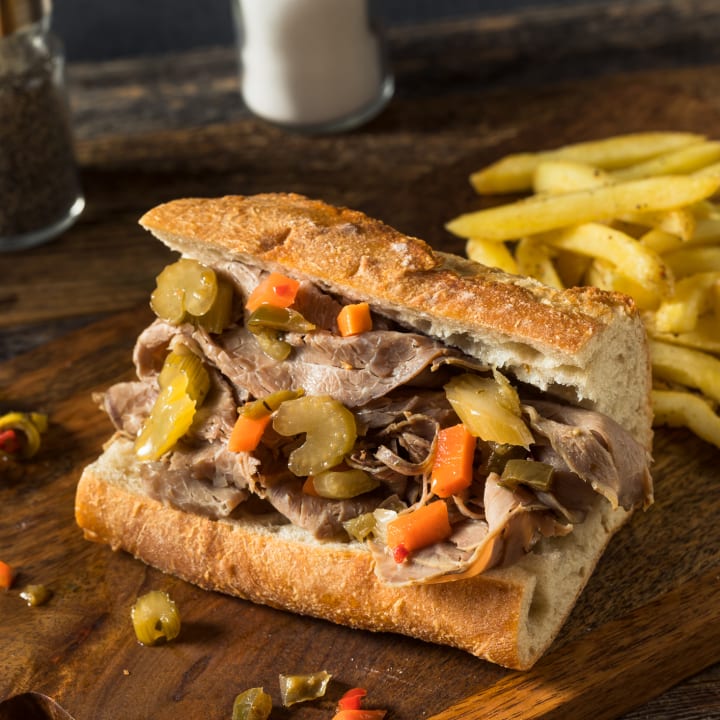 Feeling hungry? You might want to order a sassage sammich, known elsewhere as a sausage sandwich. Another popular Chicago sammich? Italian beef—just be sure to ask for it wet, another slang term indicating that you want it doused in the juices the meat was cooked in.

If you hear a Chicago kid say that they’re going to meet up with a friend in the prairie, you’ll want to scrap any visions of Little House—they’re talking about heading to a vacant lot where children play. 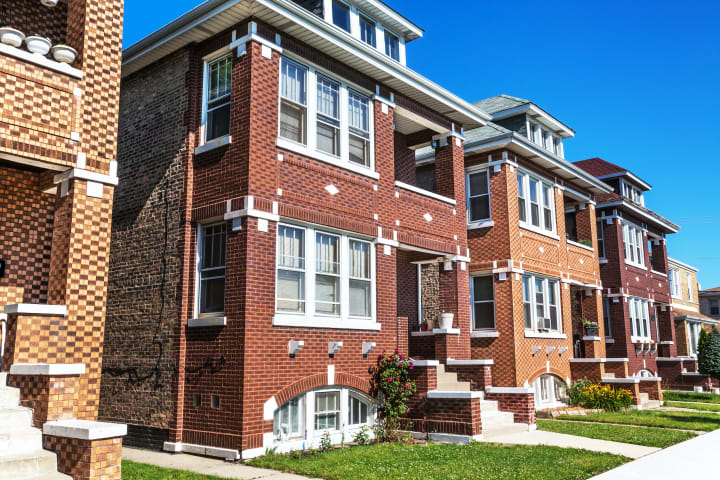 Two-flats in Chicago. / stevegeer // iStock via Getty Images Plus

Few things invoke Chicago like a row of two-flats, multi-unit brick apartment buildings originally designed to be stacked, with one tenant on the first floor, another on the second, and a common entrance in the vestibule. Although similar housing structures exist elsewhere, the term isn’t used—and certainly not Googled, according to search data—outside of Illinois. This is certainly thanks to its unique origins: Most were built between 1900 and 1920, and according to WBEZ, their development can be directly linked to the growth of Chicago’s middle class.

The benefits of two flats were two-fold: By building up, it was possible to fit more people in a space, and give owners the opportunity to gain wealth by renting out the spare unit. As Matt Cole of Neighborhood Housing Services of Chicago told WBEZ, “the two-flat and three-flat are the workhorse building of this period of Chicago.” Despite their unique historical significance, two-flats are quickly waning in popularity as many throughout the city are being converted into single-family homes.

Cheap flights between Abu Dhabi & Oman from only €32 round trip!

Cheap flights between Abu Dhabi & Oman from only €32 round trip!