Why Medieval Artists Doodled Killer Bunnies in Their Manuscript Margins

Flip through enough 13th- and 14th-century manuscripts, and you’re likely to come across a startling image in the margins: a group of bunnies roasting hunters over a fire and boiling their hounds. It’s called “The Rabbits’ Revenge,” and it was fairly popular among medieval texts.

Today, rabbits are most commonly depicted through their softer side. People tend to emphasize their cuddliness or view them as symbols that herald the arrival of spring. Of course, it’s easy to forget that rabbits have destructive tendencies, too, as anyone who has had their garden plants eaten by a leporid interloper can attest. But even that ravenous streak pales in comparison to the way they were frequently depicted in medieval manuscripts.

Far from being sweet and adorable, rabbits in the margins and illuminated letters of these texts (which were entirely made and illustrated by hand before the invention of the printing press in the mid-15th century) are frequently shown wielding swords, axes, and bows and arrows as they fight against—and sometimes kill—those who often hunted them.

These kinds of medieval images in the margins, known as drolleries, were characterized by outlandish scenes that often reversed the dynamics of the real world. In the Middle Ages, people liked to portray scenarios in illustrations as the opposite of how they were in reality. This gave rise to the expression “the world turned upside down” when referring to culture of this era.

In these manuscripts, the rabbits, which were traditionally regarded as timid and gentle—and frequently hunted by humans and their hounds—instead become vicious killers themselves. 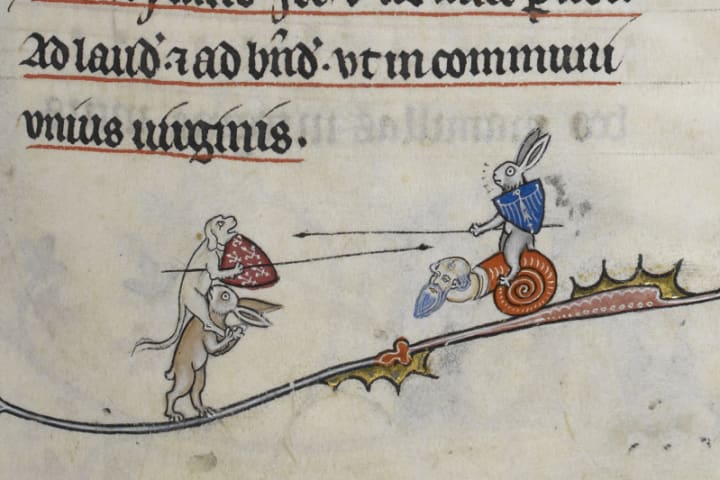 The idea of the world turned upside down appealed to artists because it offered them a chance to safely rebel, at least on a small scale, against the severe inequalities of the feudal systems of their age. The doodles were also a way to entertain people amid the oppressive nature of society at the time.

This interest during medieval times also found expression in events such as feasts of misrule, riotous parties in which workers were temporarily treated like kings and lords like commoners. These events didn’t seek to seriously challenge the social hierarchy, but instead acted as a kind of escapism for both the people in power and the powerless. The visual idea of rabbits slaying those who normally hounded them can therefore be seen as a metaphor for this role reversal; a form of anarchism in miniature.

So each Easter, when we’re confronted by images of the mild and friendly Easter Bunny handing out treats and trinkets, let’s remember this incarnation is just one of the many ways in which rabbits have been portrayed throughout history.