There’s New Data on How Your Arm Swing Affects Running

In the fourth century B.C., the Greek philosopher Aristotle laid down some key principles of running form. “Runners run faster if they swing their arms,” he wrote. “There is in extending the arms a kind of leaning against the hands and wrists.” Modern coaches explain it a little differently, but they still generally believe that pumping your arms is an important key to running fast.

Scientists, on the other hand, have had a harder time agreeing on exactly why we swing our arms, and whether there are specific ways we can use our arms to speed ourselves up. The latest addition to a century’s worth of often conflicting research appears in the journal Gait & Posture, from Lance Brooks, a doctoral student at Southern Methodist University, along with Peter Weyand of SMU and Kenneth Clark of West Chester University.

Brooks’s study (which he explains in a nice video abstract here) asks a simple question: How fast can you sprint without your arms? Sprint speed depends on how much force you can deliver into the ground. It’s easy to imagine that, as Aristotle suggested, swinging your arms helps in some way to get your body in a better position to drive your foot powerfully into the ground. That’s why, as Brooks and his colleagues point out, “in the athletics community… arm drills designed to improve running performance are commonly prescribed.” But is that prescription evidence-based?

Brooks recruited seven track athletes and ten team-sport athletes, mostly soccer players with a few other sports mixed in. They performed a series of all-out 30-meter sprints with normal arm movement, or with their arms crossed across their chest. The team-sport athletes started from a standing position, but the track athletes started from blocks. In order to start from blocks in the crossed-arms position, the researchers set up raised platforms on either side of the blocks so they could start while balanced on their elbows.

Here’s what the various positions looked like. The block start is at the top, the standing start is in the middle, full stride is at the bottom. Normal arms are on the left, crossed arms on the right. 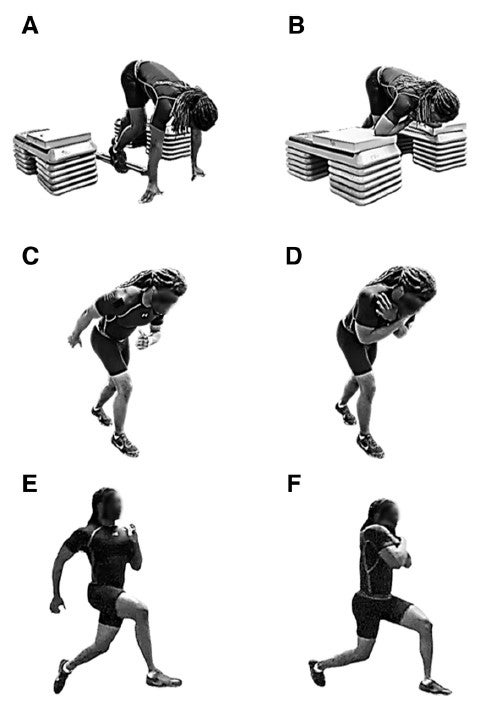 OK, now seriously: How well do you think you’d do in a 30-meter sprint from starting position B? The whole setup is so awkward that it’s a foregone conclusion that the normal sprint will be way faster. But the results aren’t quite that clear cut. The track athletes averaged 4.55 seconds with their arms, and 4.63 without. The team-sport athletes averaged 5.01 and 5.08 seconds. Overall, the difference was 1.6 percent, which isn’t nothing in the elite sprinting world but is still surprisingly small. For comparison, the variation between repeated sprints in the same condition was between 1 and 2 percent.

Moreover, the athletes were still improving at the unfamiliar crossed-arm sprint. They sprinted in each condition three times, and statistical analysis showed that their third crossed-arm try was generally faster than their second try. It’s very possible that they’d have closed the gap even further with more practice. “Clearly,” Brooks and his co-authors write, “if normal arm swing somehow translated into forward speed as widely conceived, our participants would not have been able to sprint nearly as fast in the restricted arm condition.”

If swinging your arms doesn’t make you faster, then why does everyone do it? The standard answer is that arm swing counteracts the angular momentum—that is, the body’s twisting back and forth—produced by the motion of the legs. Without it, you have trouble keeping yourself facing forward, which isn’t ideal for running in a straight line or, say, chasing an antelope. In Brooks’s subjects, when their arms were restricted they instead twisted their torsos back and forth to counteract the rotation of the lower body (as shown in this video clip). So arm swing isn’t the only way of balancing angular momentum, but it’s the simplest and most obvious one.

That seems to conflict with something Nike researchers told me when I was reporting on the company’s Breaking2 marathon project in 2016 and 2017. One of the hare-brained schemes they considered to speed up their runners was to provide them with what amounted to a straitjacket: a sling that supported their forearms and kept them tucked close to the chest. Tests on former elite runner Matt Tegenkamp and others showed significant energy savings—but they looked funny (“like a T-rex” and “like the Three Stooges” are two of the descriptions I recall), and Tegenkamp hated it. The idea was scrapped. (I recently asked a couple of the Nike researchers for more details, but they weren’t able to comment.)

Nike wasn’t the only company interested in this idea. Kram and Arellano had discussions with the people who filed this patent application in 2013 for a “forearm support garment” designed to save the energy “wasted” by holding your arms at 90 degrees. Here’s what the device looked like: 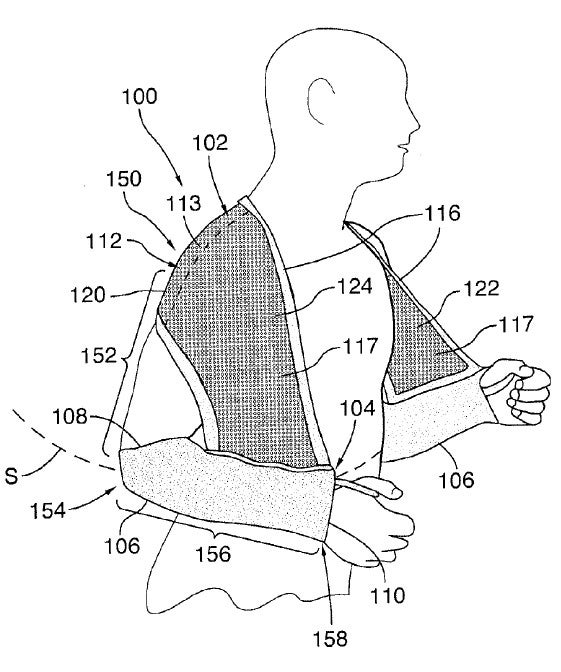 As far as I can tell, these slings aim to get the best of both worlds: your arms can swing naturally back and forth to balance the angular momentum from your legs, but you don’t have to expend any energy to hold them there or swing them. This concept of the arm swing being passively powered by the movement of the lower legs rather than actively powered by arm and shoulder muscles has some support, for example in this 2009 study from Daniel Lieberman’s group at Harvard. So there’s no inherent conflict between the idea that (a) swinging your arms enables you to run more efficiently than deliberately restricting your arms from swinging, but (b) letting your arms be swung while they’re held up by a sling saves even more energy. Whether this theory is really true has not, to my knowledge, been demonstrated in any peer-reviewed literature.

Assuming you don’t want to run in a straitjacket, you might take these various lines of evidence as final proof that you shouldn’t bother thinking about or working on your arm swing. But there’s one more twist to consider. In four-legged animals, the alternating motions of the limbs during running are coordinated in part by “central pattern generators” in the spine, in which the motion of one set of limbs cyclically triggers motion in the other set. It’s not clear how much of a role these pattern generators still play in humans, since we run on two limbs. But there’s some suggestive evidence from research on teaching people how to walk again after a stroke. For example, a 2004 study found that subjects in a recumbent stepper were able to activate more muscle fibers in their legs when they pumped their opposite arms.

Brooks and his colleagues are also cautious about prematurely dismissing the benefits of arm work: “We cannot preclude the possibility that cueing or targeting specific motion patterns involving the arms may provide indirect benefits,” they write, “particularly in younger and developing athletes.” In the end, common sense prevails: no one, including me, is going to suggest that we should stop swinging our arms because it hasn’t been proven to make us faster. But as someone whose ungainly arm swing has always attracted a generous share of unsolicited advice, I take some comfort from all this research. If running with no arm swing at all only slows your sprint speed by 1.6 percent or increases your energy consumption by 3 percent, how bad could my merely awkward arm motion be?

For more Sweat Science, join me on Twitter and Facebook, sign up for the email newsletter, and check out my book Endure: Mind, Body, and the Curiously Elastic Limits of Human Performance.

The post There’s New Data on How Your Arm Swing Affects Running appeared first on Outside Online.