The Moon Is Underrated

Earth without its moon is like macaroni without cheese, Bert without Ernie, Batman without Robin. The moon has been at the center of timekeeping for millennia—it’s at the origin of our months (formerly “moonths”), and some calendars are still lunar-based. Plus, the moon has a strong gravitational effect on Earth. The ocean’s tides are mostly due to the moon. And the tilt of our planet’s spin axis—which is responsible for the seasons—is stabilized by the moon. So it’s kind of a big deal: Without a moon as big as ours, it’s possible Earth wouldn’t have the sort of environment that’s ideal for life to develop and evolve.

From down here on Earth, we often take the moon for granted. Our moon is the most massive moon of any planet in the solar system relative to its parent planet (the mass ratio between the Earth and moon is about 80:1). Mars has two moons but each is puny. Some of the gas giants have more massive moons (like Jupiter’s moon Ganymede and Saturn’s moon Titan), but those are hundreds of times less massive when compared with their host planet. Yes, Pluto has a moon (Charon) that is 1/8th of its mass, but is it a planet?

The origin of the moon is a heavily-studied subject in planetary science. In 1879, George Darwin, son of Charles, proposed the fission theory—that the moon represents a chunk of the Earth that was barfed out early in Earth’s history due to its very fast spin. That theory perished in analyses by the Apollo mission. A competing theory claimed that the moon was its own small planet floating around the sun, but was captured into orbit by the mischievous young Earth. That theory has not completely disappeared, but no one has figured out a way for the capture mechanism to work smoothly. (In contrast, Uranus’ large moon Triton is indeed thought to have been captured, but Uranus’ much slower orbital speed around the sun makes capture more efficient). 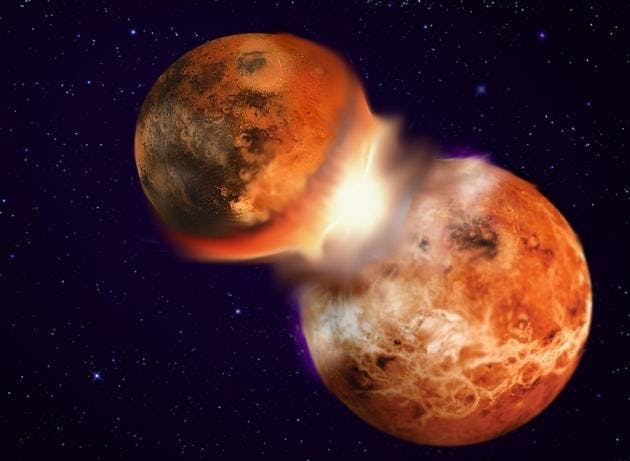 SMASHED INTO BEING: Artist’s view of the moon-forming impact. Illustration by Hagai Perets

Currently, the dominant theory is that the moon formed as a byproduct of a colossal impact. The late stages of the formation of the terrestrial planets were characterized by collisions between a roving band of one or two dozen roughly Mars-sized rocky planetary embryos. The final giant impact on Earth is thought to have created a disk of debris and vaporized rock, inside of which the moon coalesced. There is still debate about exactly how it all went down—how energetic that final impact was and how massive the proto-Earth and impactor, what they were made of, and what the moon-forming disk looked like. Nonetheless, the giant impact hypothesis has become the paradigm for moon formation (although an alternate model proposes a series of smaller impacts1).

What are the odds of a planet having a nice big moon like ours? Addressing this question is the subject of a new study published in Nature Communications led by Miki Nakajima, a planetary scientist at the University of Rochester.2 The researchers used a suite of computer simulations of giant impacts to evaluate the probability of forming large moons. They tested planets of different sizes and with two different compositions, contrasting rocky planets with ice-rich ones.

The researchers simulated the high-energy impact of two massive proto-planets, focusing on scenarios that created a disk around the surviving planet. The disk consisted of vapor and liquid: rock vapor and magma droplets for the case of rocky (Earth-like) planets, or steam and magma or liquid water droplets for the case of ice-rich planets. A key piece of the analysis was to figure out the relative amount of vapor relative to liquid in different impacts, because it is central to the size of moons that can form. In vapor-dominated disks the liquid feels a strong headwind from the vapor that causes it to spiral in and fall onto the planet before it gets a chance to solidify and grow. This ends up forming small moons, because the liquid droplets are essentially the seeds of moons. In disks with little vapor, the headwind effect is much weaker such that a much larger fraction of the liquid in the disk can survive, solidify, and grow into large moons.

The study’s main result is that large moons are less likely to form around large planets. When impacts are too energetic, the disk always ends up vapor-rich. Massive moons did not form in the researchers’ simulations around rocky planets more massive than 6 times Earth’s mass, or around ice-rich planets more massive than Earth. The difference between rocky and ice-rich planets comes mainly from the simple fact that it takes less heat (and therefore lower impact energy) to vaporize water than rock.

The search for moons around exoplanets, or “exomoons,” is in full swing. Two exomoon candidates, Kepler-1625b I3 and Kepler-1708b I,4 have been identified to date from analysis of the detailed shapes and timing of brightness variations as giant planets pass in front of their host stars (see here for more). Each candidate represents a potential ice-giant-sized moon orbiting a gas giant, a fundamentally different scenario from the one studied in Nakajima and colleagues’ impact simulations. 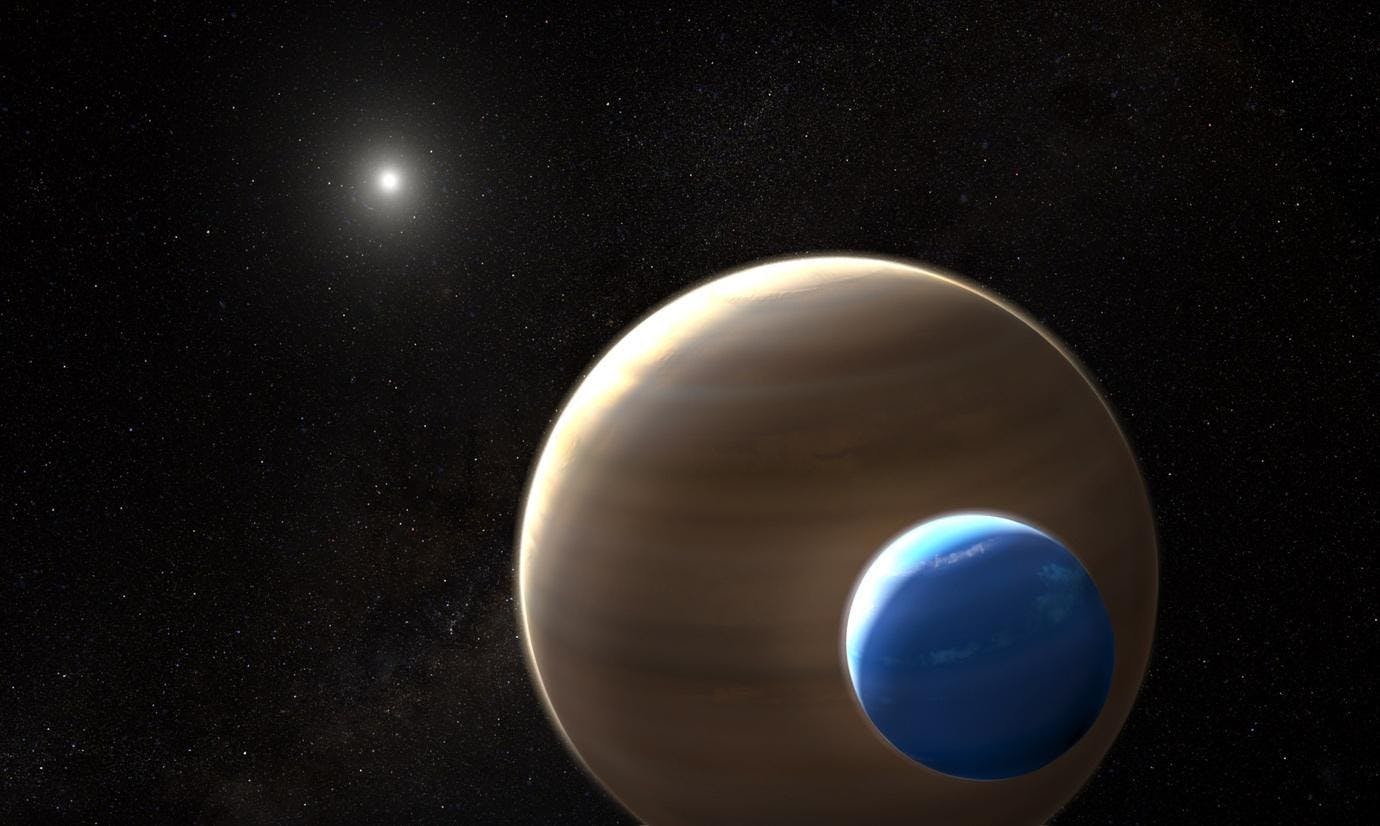 Researchers have searched for moons around 100 planets closer to Earth’s in size (but much closer to their stars than Earth is to the sun). No good exomoon candidates have been found. The reason for this apparent lack of exomoons is unclear. One possibility is that the strong tides felt by planets close to their stars act to destabilize the orbits of large moons. It’s also possible that large moons simply don’t form as readily as we might expect, and extrapolating the conditions of Earth’s moon-forming impact does not capture the typical outcome of exoplanet formation.

On a philosophical note, it’s interesting that the two candidate exomoons are so different than any found in our solar system. When searching for a faint signal it is often the easy-to-spot outliers that jump out first. The first exoplanets discovered were “hot Jupiters”—gas giants orbiting very close to their stars—but we now know that those are rare among exoplanets. Likewise, Neptune-like moons around exo-Jupiters may be a freak outcome of planet formation but the one that we can see.

In the coming decade we should have piles of new data to sift for exomoons that are more similar to our own. According to Najakima and colleagues we should only expect to find the large moons around smaller planets. Anyone living on the larger planets will have to find a different way to keep track of their moonths.

Sean Raymond is an American astrophysicist working at the Bordeaux Astrophysical Laboratory in France. He also writes a blog at the interface of science and fiction (planetplanet.net) and recently published a book of astronomy poems.

The post The Moon Is Underrated appeared first on Nautilus | Science Connected.