Late one afternoon in the Chicago offices of Outside, I detected some consternation from down the hall, a glitch in the matrix. It was June 1990, and the new issue had just arrived. Marshall Sella, one of our junior editors, came to the door, clearly the designated bearer of bad news. None of the senior editors were going to take responsibility for this one.

“J.R.,” he said, “I’ve got something unfortunate to tell you.” In one of our recent travel packages, he reminded me, we’d published a photo of Earth taken from space, and somehow it had been reversed, making the enormous island nation of Madagascar appear to be off the west coast of Africa—which, of course, it is not. Embarrassing enough.

We’d printed a clever but tortured correction, but now, two months later, someone had noticed that we—i.e., Marshall—had apologized for “showing Madagascar to the east of Africa,” which is where, in fact, Madagascar is. So, we’d botched the photo, then botched the correction, and now we’d have to own up to that, too. In my mind, that would be three tainted issues we couldn’t submit for the National Magazine Awards, at least not for, you know, General Excellence. A steep price for “clever.”

Marshall gamely attempted to explain the unforced error. It had something to do with confusing the east coast of Africa and the west coast of Madagascar, I don’t remember the details, but I do recall his fascinating combination of candor, self-pity, remorse, growing acceptance, and … suddenly, redemption. His face brightened.

“Or maybe,” he offered, “we didn’t really get it wrong. Madagascar is to the east of Africa! Maybe we don’t need to apologize for the apology we didn’t need to make!” This, at least, was the kernel of a reason not to do anything, which I liked. But now he was thinking bigger—about how he could turn this insight into an even more clever meta correction. “Let me see what I can do,” he said, and scooted back to his office.

Marshall Sella, who died unexpectedly in December at 60, still so young, was as responsible as anyone for shaping the Chicago-era vibe of Outside. Founder Lorenzo Burke was the fearless captain of our ship. Brash storytellers like Tim Cahill, writer-adventurers like David Roberts, literary hotshots like David Quammen and his Montana neighbor E. Jean Carroll—they set the bar early and high. But the supporting cast, the editorial crew—younger, less experienced, and, as it turned out, extremely talented—helped shape Outside’s personality and its voice, and nobody more than Marshall. That voice was warm but sly, smart, and never cliquish. If there was a joke involved (and there usually was), you, the reader, were in on it.

Marshall joined us in 1988 as a grad school intern from Northwestern’s Medill School of Journalism, making an impression in his Eastern European military coat and English walking boots. But he was also the midwestern kid from Fond du Lac, Wisconsin, who’d had the lead part in a Milwaukee Players production of Sherlock Holmes. (Maybe that’s where he got those walking boots.) He’d even sung a bit. In any case, he came ready to entertain, in print and around the office.

In those days all the editors, myself included, were works in progress, feeling a bit disconnected from the great outdoor world we covered from our urban outpost at Clark and Division. We had high aspirations for the magazine, we didn’t always meet them, and office life could get a little stressful. I shamefully cop to the label of being “demanding,” at times perhaps borderline insufferable. In any case, we needed all the fake-it-till-you-make-it energy and bravado we could muster, which Marshall supplied, every day, with his warm smirk, his sophisticated, Spy-influenced style, and his near hourly outbursts of laughter that I could hear from my desk.

After graduating, he came on full time and started editing product and travel packages and sidebars, cooking up quizzes, and writing house copy. You could discern his hand in everything from the table of contents to the back page Parting Shot. He worked his captions and short intros to insane, often hilarious precision. It’s easy to see how, by the tenth draft of that Madagascar correction, he’d have utterly confused himself.

Marshall’s office banter was so sharp and came so fast that “he raised everybody’s game just trying to keep up with him,” remembers his fellow intern and future author Dan Coyle. “He had an ability to make other people their funniest, happiest selves.” 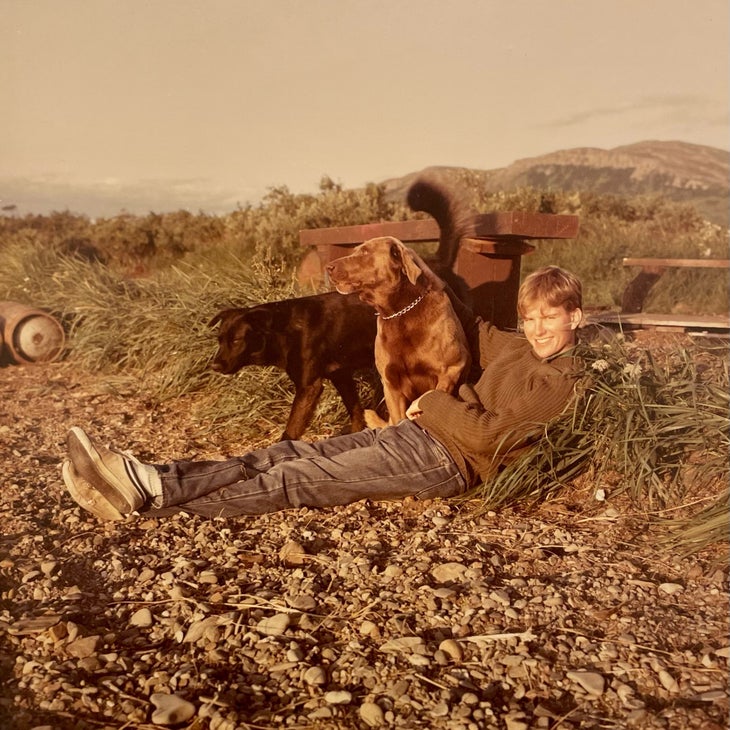 Sella taking it easy at a hunting lodge in Canada, probably in the late 1970s (Photo: Courtesy of the Sella family)

A few days ago, more than a dozen of his colleagues got together on a Google call to remember Marshall, and I learned a few new things. He gave fellow editors nicknames like Cashew Head and performed droll impressions of our managing editor, Mark Bryant, and the actor James Mason—if Mason were a slowly sizzling piece of bacon. He claimed that Robert De Niro, with every movie he appeared in, always had a scene where he stomped on someone’s head. He would imitate that, too, with gusto. On the other hand, Marshall’s was the office you went to when you needed to have a little cry.

When Rob Story, a prominent ski writer and another intern from the early days, got married in Telluride, Colorado, Marshall was one of his groomsmen. Dressed in his tuxedo on the big day, and sensing the absurdity of his attire in the Old West mining town, Rob remembers, Marshall went up to the hotel clerk and asked, “Could you tell me if there’s a nice clean hiking trail nearby?”

He was the brother—younger, older, it didn’t matter—we were drawn to and, honestly, adored. By definition, then, we were kind of a family, and he was the star.

“I think everyone had a crush on him,” his friend and colleague Laura Hohnhold said. “All of us.”

Marshall left Outside in 1991 to be a full-time freelancer, then moved to New York in 1993. He slowly became a gravitational force again, writing for New York, GQ, Premiere, Elle, The New York Times Magazine. His friend Will Dana, the former editor of Rolling Stone, recalls him attracting crowds of both sexes at downtown writers’ parties. The staff at Outside, which moved to Santa Fe in 1994, were thrilled when he covered the national cheerleading championships for the first issue of Women Outside.

Marshall’s superpower, everyone seems to agree, was his ability to fiercely connect with and observe people, capture their quirks and tells, and shape those insights into powerful stories, even with only scraps to work with. His moving Times Magazine article “Missing,” published just weeks after 9/11, told the stories of victims through the flyers their loved ones posted all over the city. He profiled Sister Wendy, a British nun and art historian turned wildly popular PBS star, and was one of the very first to capture the populist essence and power of a new media outlet called Fox News. Its boss, the notorious Roger Ailes, was “a pugnacious and jokey man,” Marshall wrote. “His pale blue eyes regard you suspiciously until you’ve spent a lot of time together, and half-suspiciously after that.”

Mark Adams, an old friend and author himself, admired Marshall’s ability to drop himself into stories—subtly and unobtrusively, but to important effect. Not only was he connecting and explaining his subject, but he turned and connected to you, revealing himself along the way. Adams points to Marshall’s 2013 story for GQ about the disgraced New York pol Anthony Weiner.

“Writing a true profile is a genuinely weird endeavor,” Marshall confesses in the middle of that piece. “It’s like being in love without the love: You want to know every little thing about the subject. You will follow them anywhere, always wondering what they’re thinking or why they move their hands like that. You think about them when they are not around. During the reporting phase, if you’re any good at what you do, you’re a little bit insane. But you get time to cool off later: take the real measure, look at the experience from a distance.”

That superpower, like superpowers do, also cost him. His older sister, Claire Meyer, remembers watching a post-9/11 episode of Ric Burns’s PBS series on New York City, which included a brief clip of Marshall reporting “Missing.” “He’s holding one of those flyers, looking at the photo of a victim,” she says, “absorbing the loss not only of an individual, but in its totality.” She remembers watching her brother put his hands to his face, stricken.

By the early 2000s, Marshall had more magazine work than he could handle. According to Dana, “Every editor he worked with wanted to work with him again.” Each piece needed to be perfect and on time, and he expected his editors to get what he was trying to do. Later in his career, his friends say, he’d decide if he wanted to work with someone based on whether he thought they’d cut his jokes.

Marshall’s only thwarted ambition, Adams and others say, was to become a successful humorist, a Will Rogers type or a comedy writer for Letterman. That combination of high-wire wit and a big stage would have been worthy of his talents. He had to settle for being one of the best magazine writers of his generation.

Finally, he was also a great and thoughtful friend. Adams, an early riser, would get morning texts from night-owl Marshall wrapping up his workday at 5 a.m. Long before Facebook, Adams remembers, “Marshall would find out your birthday and call or send you an email every year.” He was close to his family back in Milwaukee—“he was the coolest uncle in the world, my role model,” his nephew, John Mörk, told me—and kept in touch with his Outside family. We all got one of those birthday greetings every year.

One of the nice things about being around for the early days of a magazine, or any organization, is that you have a chance to set a tone, a sensibility. If it works, it can carry on, like a regional accent, for generations. Reading Outside today, I hear Marshall’s voice still coming through from a group of smart, young, ambitious editors and writers who were likely toddlers when Marshall was crafting that sound, testing it, taking it to the next level.

Not long before he left Outside and Chicago, Marshall wrote what turned out to be a fitting send-off, for the magazine’s 15th anniversary issue. Titled “Atlas Shrugged,” the short piece captured our early days perfectly: self-aware, not afraid to fail, ready to delight.

“Magazine editing, like faith and seismic shifts, can move mountains,” he wrote. “And over the years, Outside has moved a few of them—not to mention the odd rainforest, country, and ocean.” His piece recounted the magazine’s most boneheaded location muffs and, in a final meta touch, named his Madagascar double doink “Outside’s most ambitious gaffe of all time.”

“No one is fired for the incident,” he wrote about that day in my office, “though the man responsible for the ‘correction’ is later forced to write an article about geographic errors for Outside’s 15th anniversary issue.”

The post The Funny Man appeared first on Outside Online.

Home Chef Sends Ready-to-Cook Meals Right to Your Door, and Now You Can Save Big on Your First Three Deliveries

Home Chef Sends Ready-to-Cook Meals Right to Your Door, and Now You Can Save Big on Your First Three Deliveries