by Mary Parker
in Food & Receipts

I’m of the opinion that pretty much everything tastes better in a toasted tortilla. I often take leftover ingredients from my fridge and turn them into a tasty quesadilla. So that’s exactly what I made with the leftover frozen spinach in my freezer. Easy, cheesy, creamy Spinach and Mushroom Quesadillas!

Can I Use Fresh Spinach?

I also tested this recipe using fresh spinach, just to see which would be better. I added the fresh, roughly chopped spinach to the quesadilla filling without sautéing. The quesadillas were good, but they did get a bit watery if they sat in the hot skillet too long or sat on the plate too long before eating.

Another option for fresh spinach would be to sauté the fresh spinach down until almost all of the water is cooked out, but you’d likely need a very large quantity of spinach yield enough to fill the quesadillas once sautéed.

I kept my spinach and mushroom quesadillas very simple with classic mozzarella cheese, but you could have fun here and add more flavor by swapping out the cheese or adding a second type of cheese. Adding a few crumbles of feta or a couple of tablespoons of grated Parmesan to the mozzarella would add an extra punch of flavor. Mixing in some smoked gouda would also be amazing! If you want things a little more spicy, you could use pepper jack in place of the mozzarella. 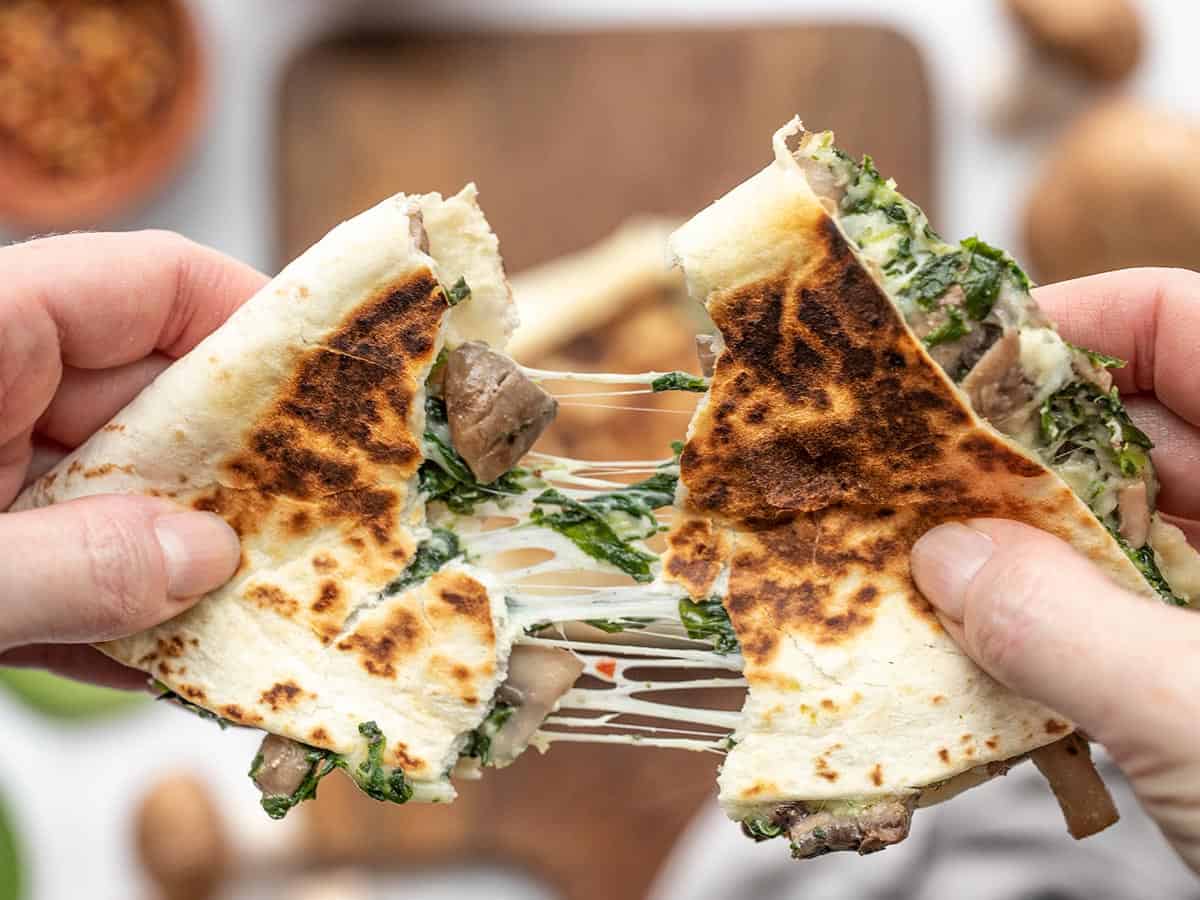 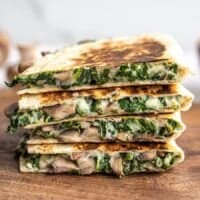 *You can swap out or mix in your favorite type of cheese. 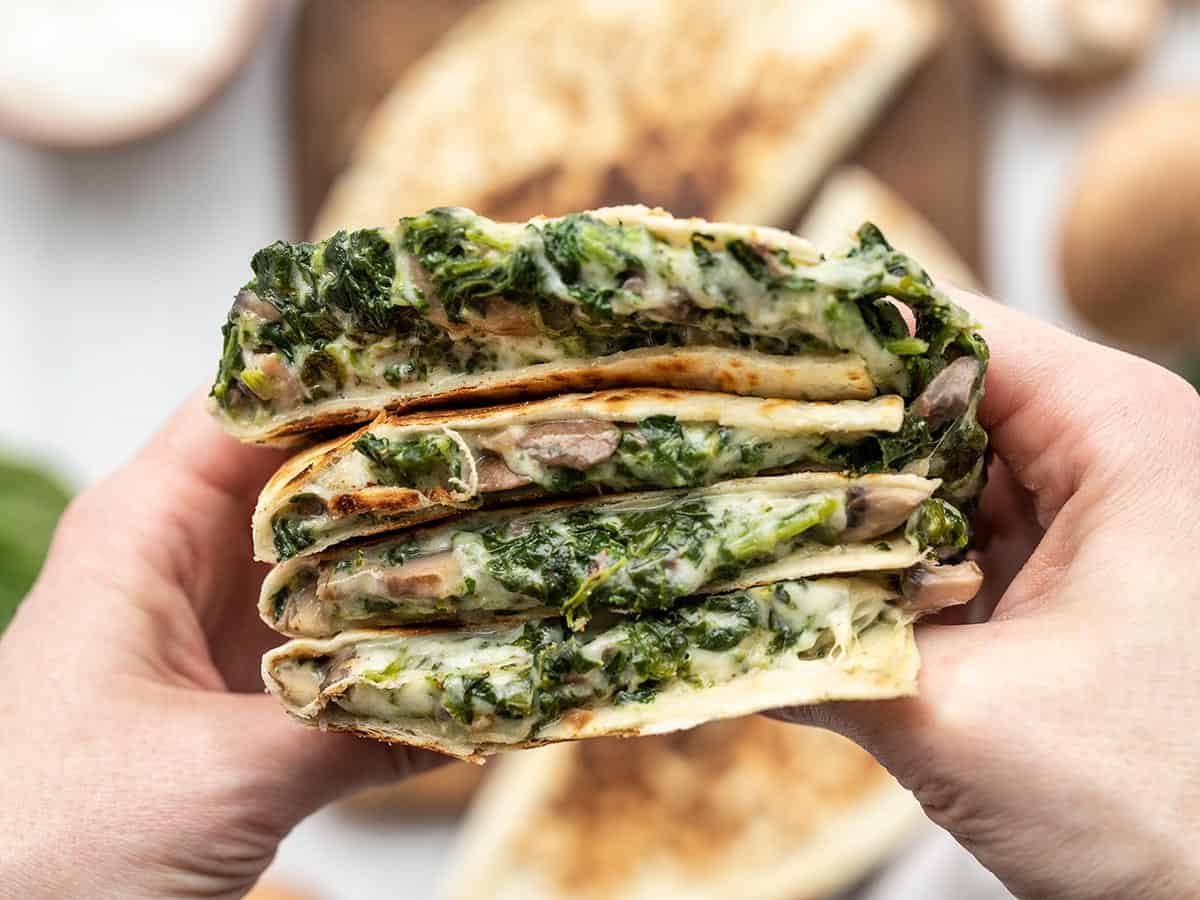 How to Make Spinach and Mushroom Quesadillas – Step by Step Photos 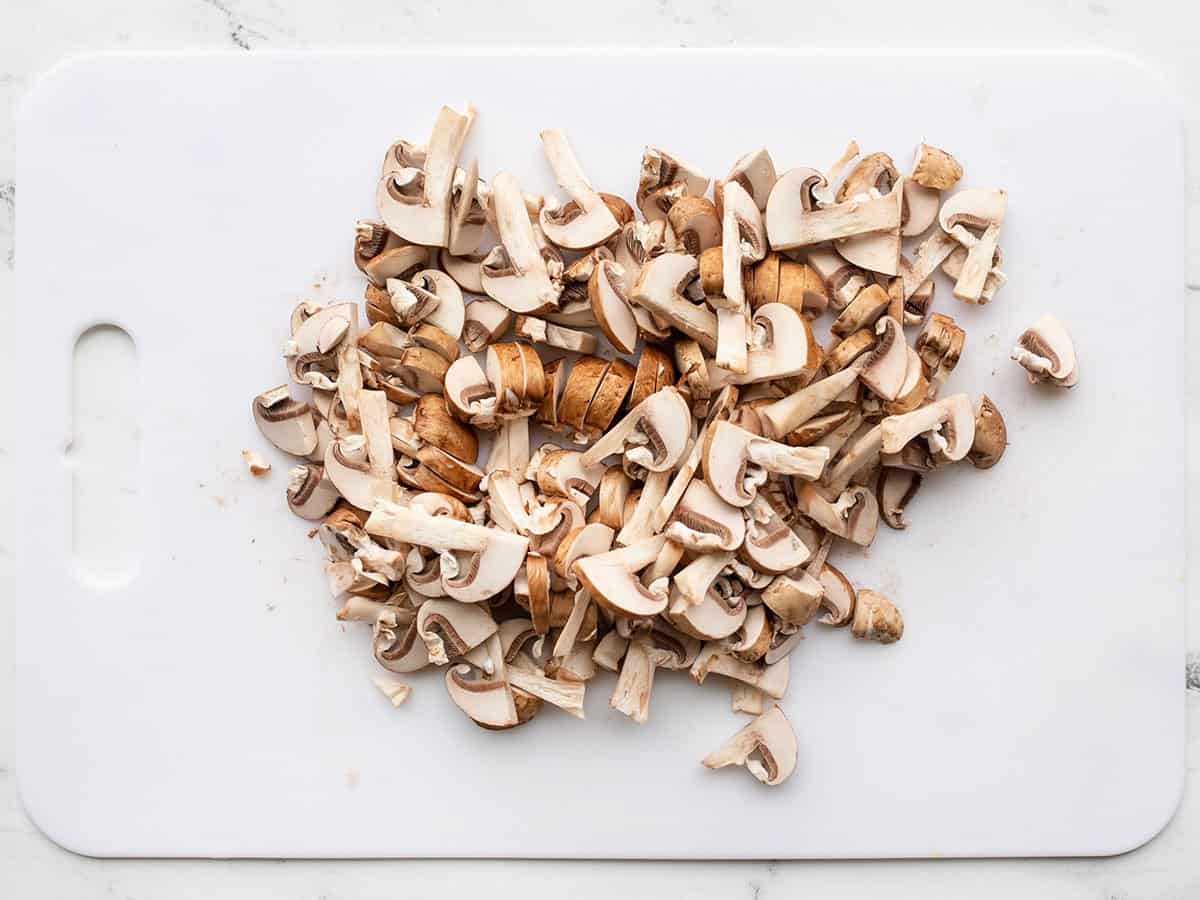 Slice 8oz. mushrooms. I used baby bella, but you can use whatever type you like. 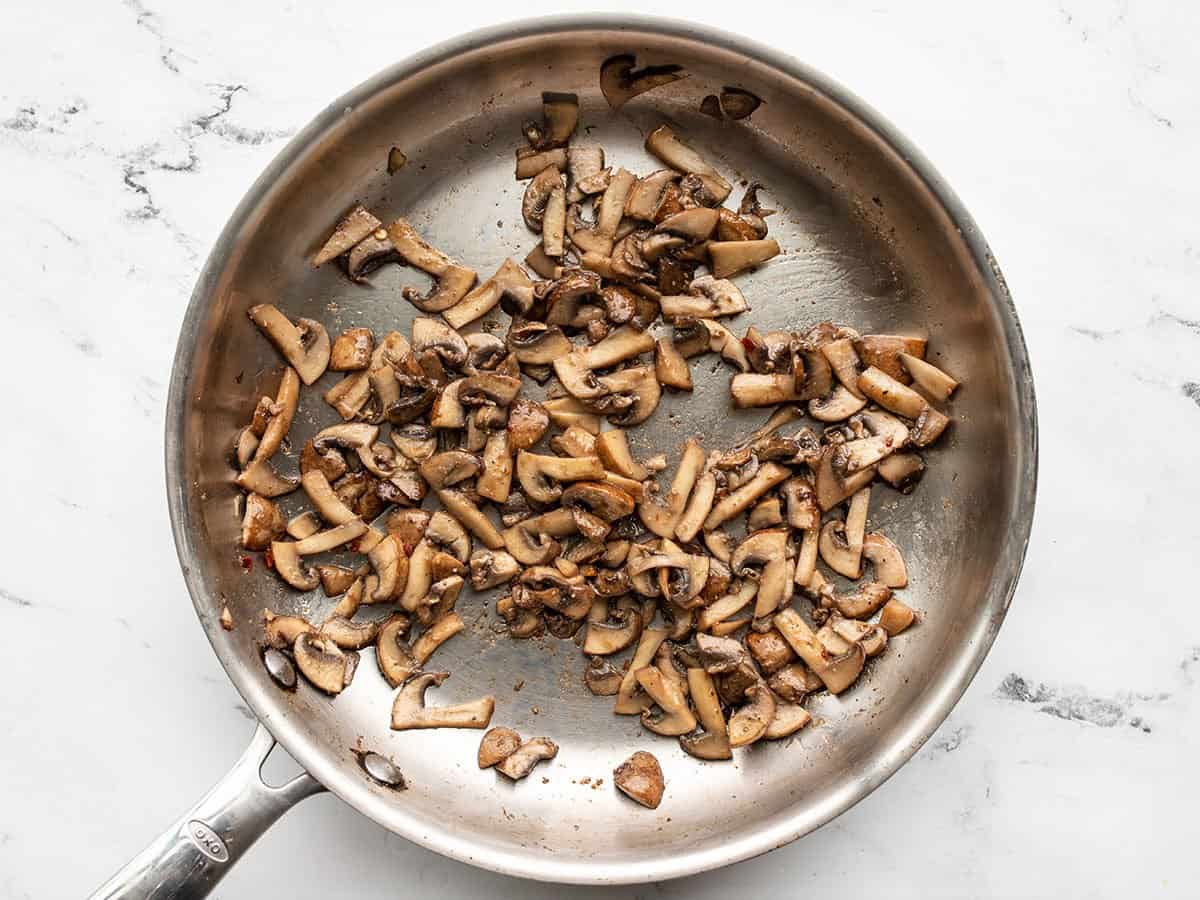 Add the mushrooms to a skillet along with 1 Tbsp cooking oil, ¼ tsp garlic powder, ⅛ tsp salt, ⅛ tsp pepper, and ⅛ tsp crushed red pepper. Sauté over medium until the mushrooms have released all of their moisture and it has evaporated out of the skillet. Set the mushrooms aside. 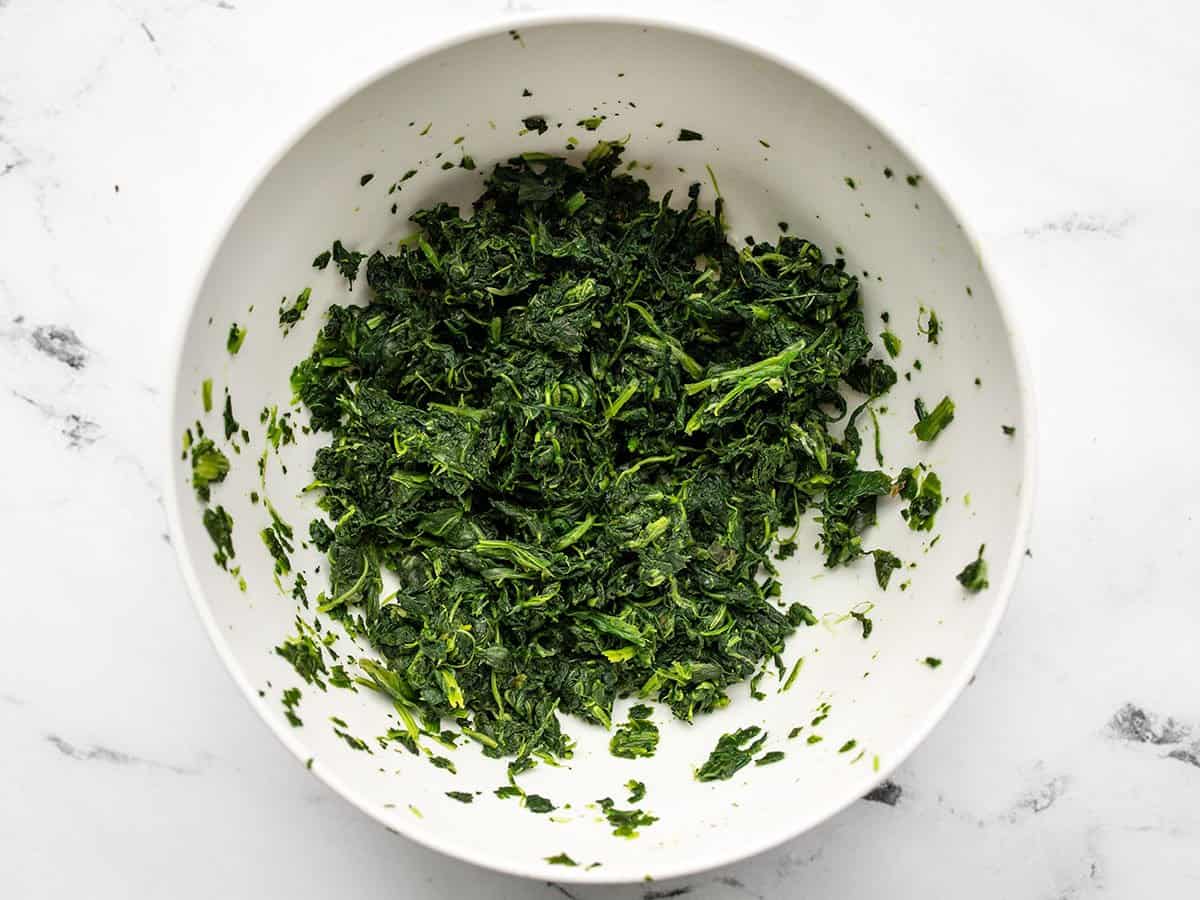 Thaw ½ lb. of frozen chopped spinach. Squeeze as much water out of the spinach as possible. You should have about one loosely packed cup of dried spinach. 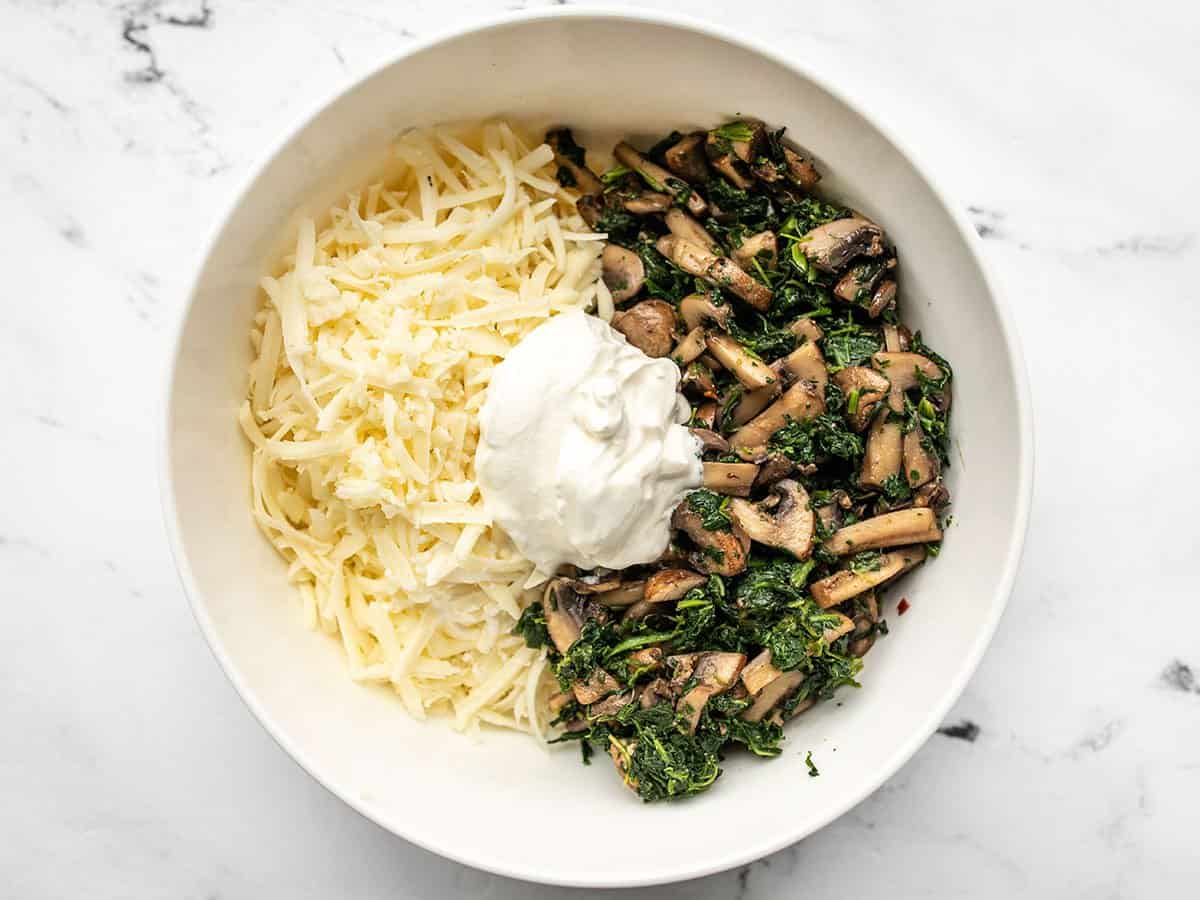 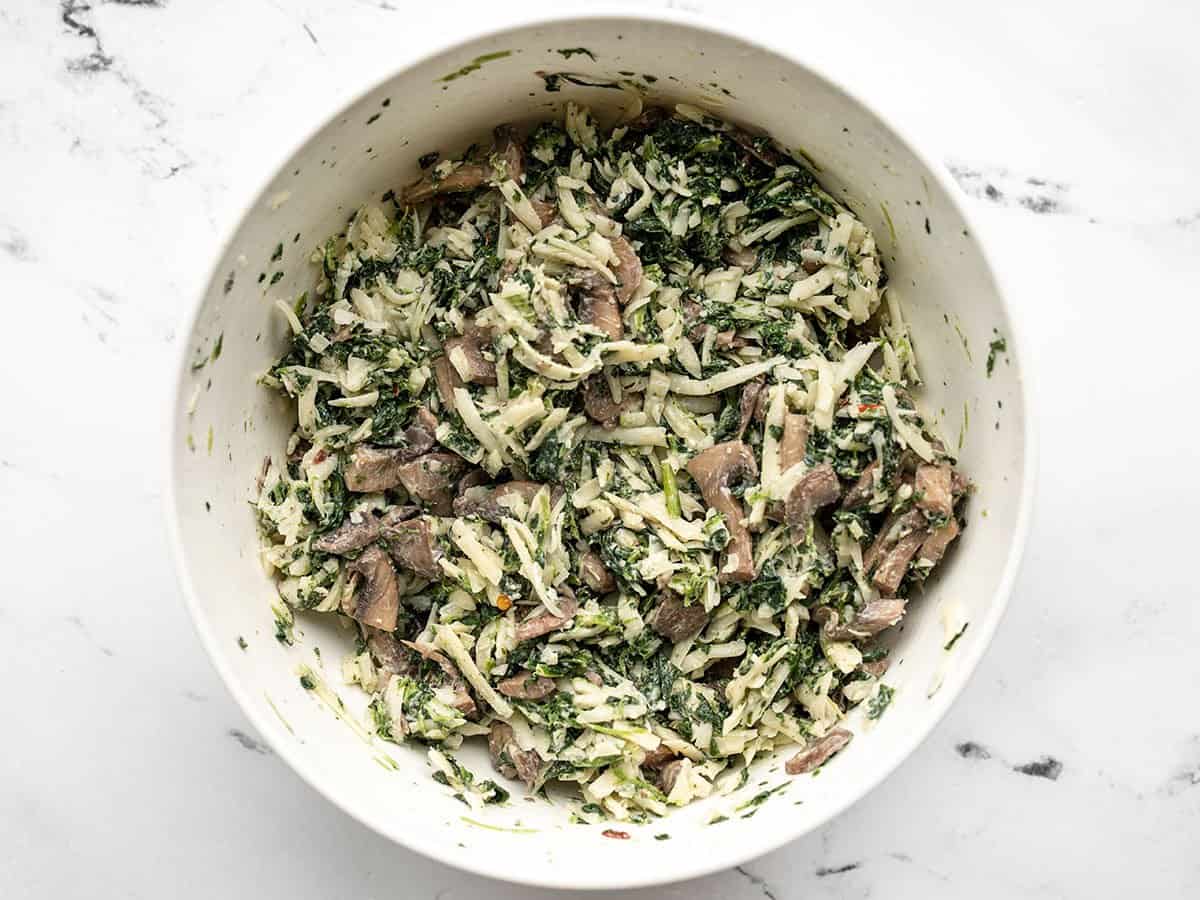 Stir the ingredients together until well combined. 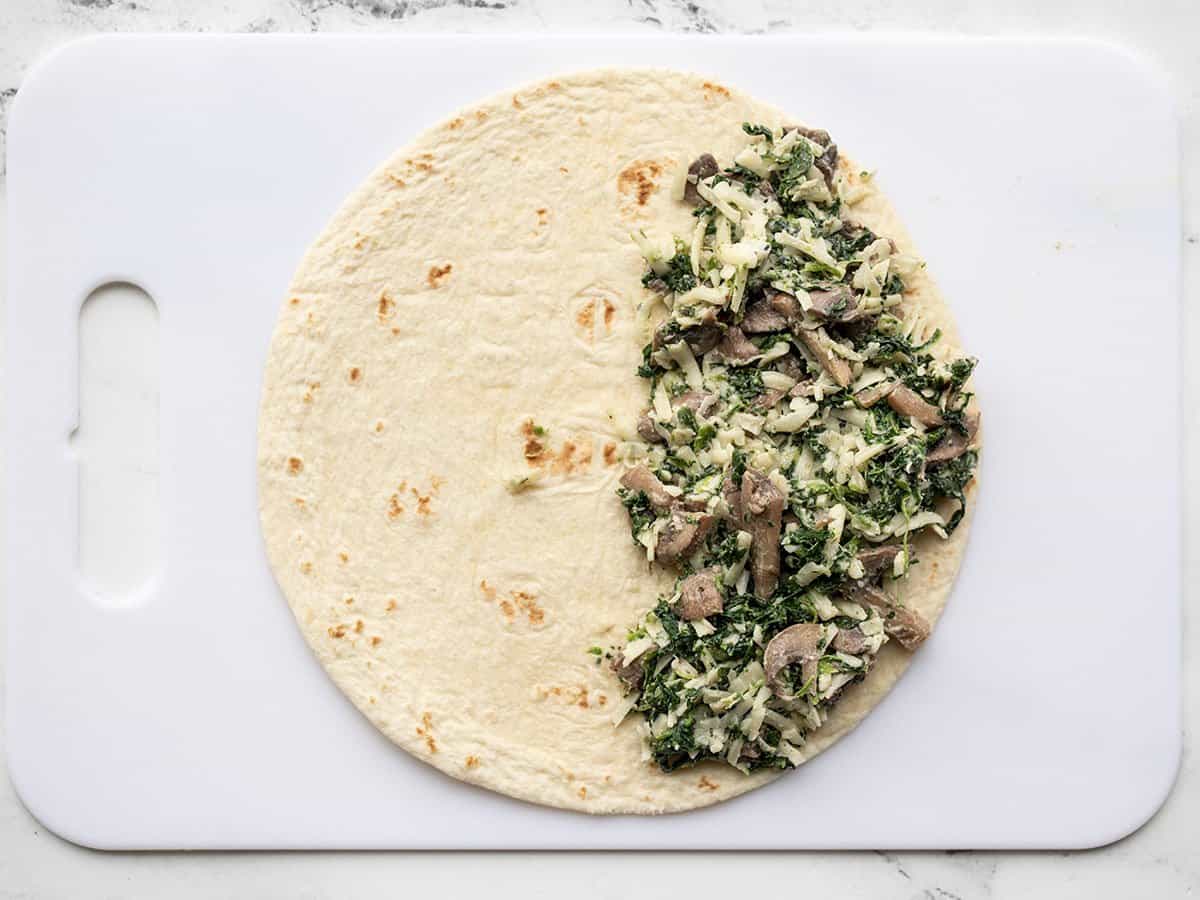 Add about ½ cup of the spinach mushroom mixture to each tortilla, spreading it out over one side, then folding it closed. 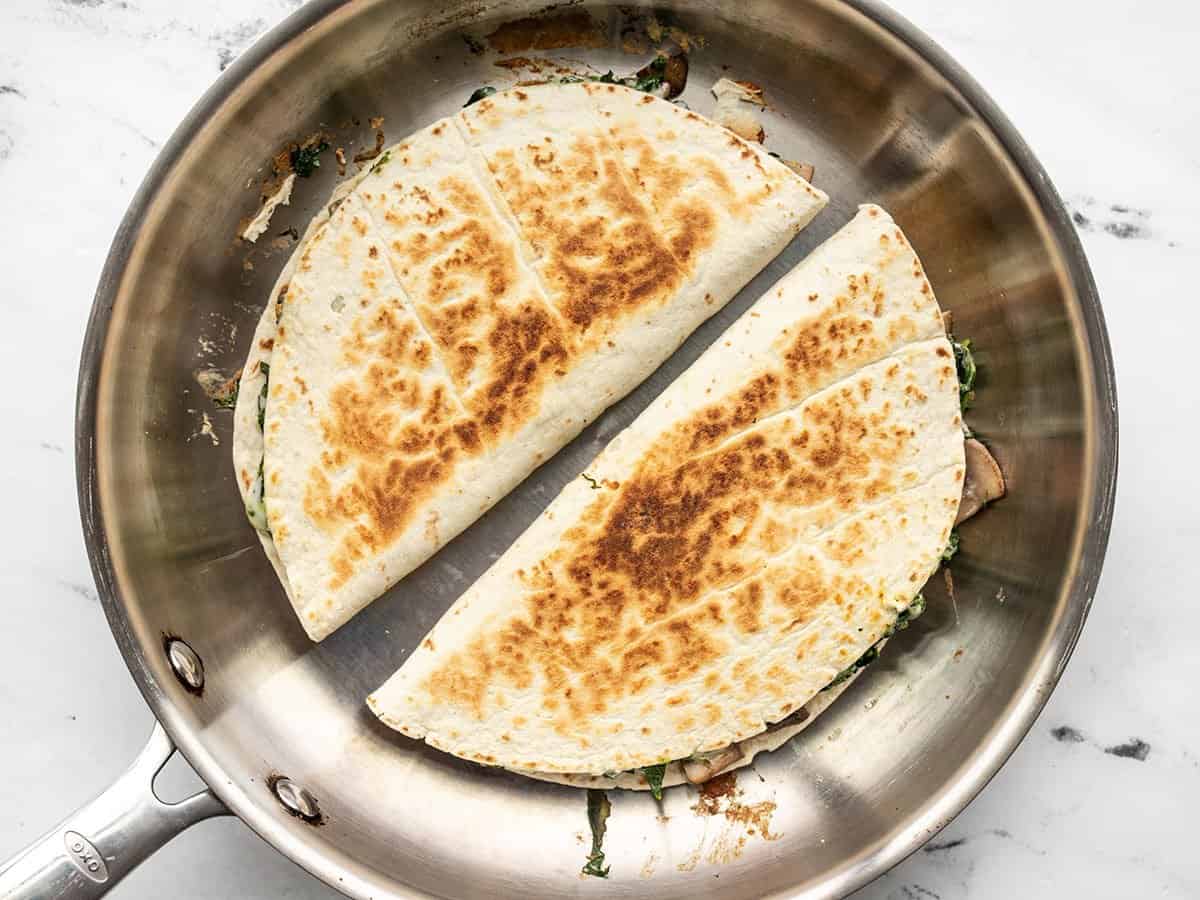 Toast the quesadillas in a skillet over medium heat until they are golden brown and crispy on the outsides and melty on the insides. I don’t use any butter or oil in the skillet, but you can if you prefer a more fried texture to the tortilla. 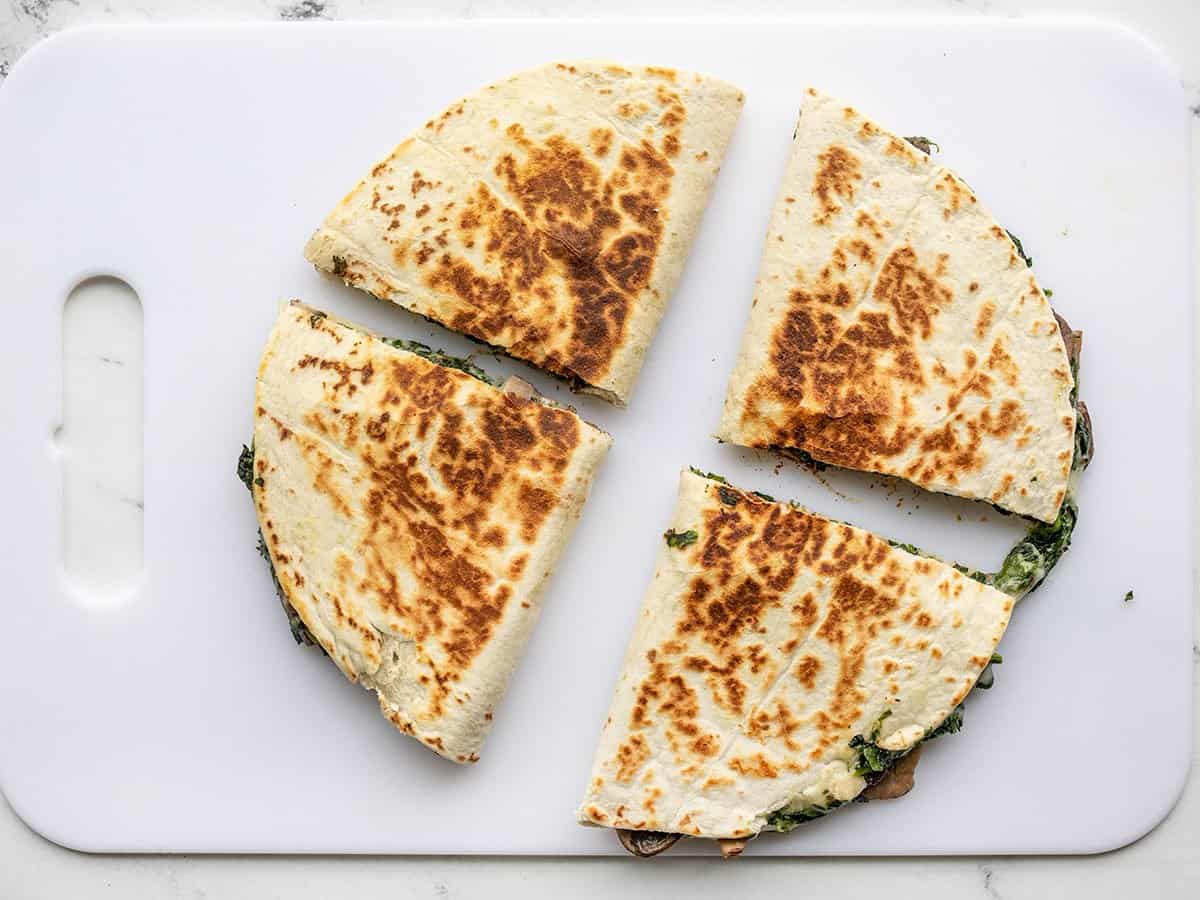 Slice the quesadillas in half and serve! 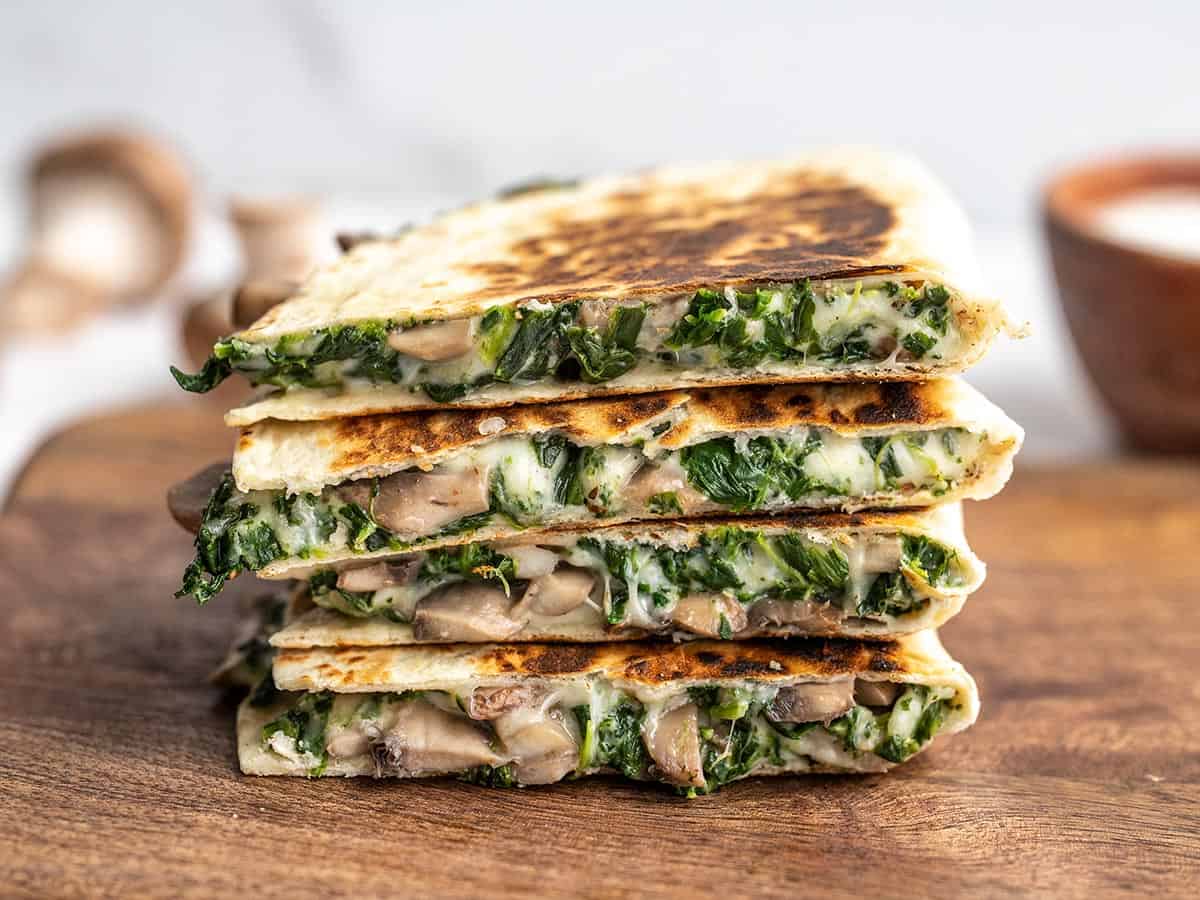 Try These Other Quesadilla Flavors

Poor Sleep Is a Significant Risk Factor for Heart Disease