My Daughter Fell in Love with Camping Through Glamping, and I’m OK with That

Past versions of me have taken great pride in the myriad ways I’ve suffered to enjoy life outside. Like the many times I’ve been soaked by leaks through my truck shell when I lived in my vehicle. Or the rafting season I spent sleeping on the ground because I didn’t want to travel with a pad. I felt like suffering was an important buy-in, my ante to earn a seat at the table as an outdoorsman. But now, as a family man, I need to strike a balance—to make camping both fun and accessible for the whole family, most important our four-year-old daughter, Jojo. So last summer I did what a previous version of myself would have found unthinkable: I became a glamper.

The radical shift in my mindset happened after I used the Life in Tents Stella Bell tent ($1,699) as a beach house of sorts for five weeks. It was our family of three’s main shelter, a 16-foot diameter amusement park for Jojo and her buds, a place to escape the oppressive smoke that choked our hometown in southern Oregon, and a perfect jumping-off point for dozens of glorious hikes, runs, and surf sessions. As a temporary abode, it gave us nearly all the comforts of our house in an aesthetic package that we could dress up unapologetically with string lights and a Pendleton blanket. It was glamorous and yet also a practical place to spend almost all day outside. It was, in a word, perfect.

To be clear: I’ve glamped before, and I was an asshole about it. We were invited to an AutoCamp property outside Yosemite National Park a couple years ago, but rather than focus on the sparkling white bathrooms, where I could comfortably bathe my tiny child, or the crisp bed, on which we read her stories about the granite monoliths we’d seen on the Valley floor, I lurked around the property and looked for opportunities to feel superior to my fellow glampers. One particularly shitty text to an old friend read: “I see a John Muir quote in yellow cursive neon lights. Peak irony.” My daughter, however, loved just about every minute of the trip and the comfort the amenities allowed my wife and I to relax into our first Yosemite trip as parents.

And then we got to test the Stella, a top-notch glamping tent, last summer. At 111 pounds, it was so hardy that it leaned more toward the fifth-wheel end of the shelter spectrum. Its 19-ounce PVC floor was burlier than the materials of rafts I’ve taken down Class V rapids, and the sturdy canvas walls were so thick that the tent became eerily quiet when fully zipped. The tent body repelled sound waves and kept us toasty when we were zipped up inside. In fact, one night we all woke up sweating and didn’t realize that outside the temperature hovered in the low forties until we vented the Stella and became uncomfortably cold within an hour. 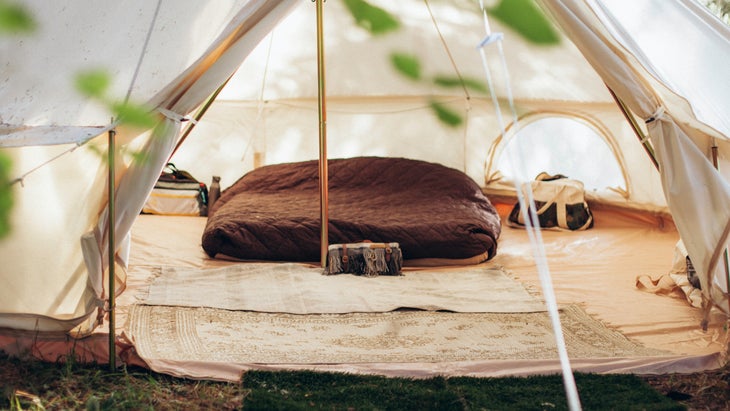 The canvas is also completely waterproof—the interior stayed totally dry even after weeks of dense fog and a smattering of light rains. I’ve not yet tested it in heavy showers or snow but would feel comfortable using it as a second winter home in southern Oregon. A friend who lives off-grid in the area with his family agreed that it could be a four-season home for several years. It’s worth noting that the Stella didn’t mold amid near constant maritime moisture and, more impressively, after I lazily packed it up wet and left it under a tarp in my yard for weeks. Credit the mildew-, rot-, and UV-resistant finish added to that cotton canvas.

Beyond its durability, it was ridiculously user-friendly, too. The massive 16-foot-diameter footprint, nearly ten-foot ceiling at the center, four screened windows, and large door with silky-smooth zippers allowed us to spread out with toys (like a ten-foot longboard) as well as perfect airflow while we were on the coast, where temperatures fluctuate.

It was also easy to put up and take down. Three adults had it dialed in just about an hour, and we took it down in about 45 minutes. While that would be an insufferable amount of time to get a backpacking or car-camping tent up and livable, the aforementioned benefits make that time investment worthwhile.

To better understand glamping, I spoke with the coauthors of the definitive glamping book Comfortably Wild: The Best Glamping Destinations in North America, Anne and Mike Howard. The couple has stayed at and reviewed over 200 boutique hotels and outdoor glamping accommodations around the world. After 400 nights spent on various properties, their perspective of glamping is straightforward and inclusionary: “If it offers creative structures, comfortable accommodations, engaging experiences, and makes getting outdoors a little easier, that’s glamping to us,” Anne says. The ease of settling into an outdoor environment can benefit any type of recreationist, even someone who wants to rough it a bit. “It’s pretty rare that every member of a family wants a hardcore wilderness experience—or an all-inclusive resort for that matter,” Mike says. “Regardless of each person’s skill or comfort level with the outdoors, glamping helps bridge the gap.”

Looking back on the time our family spent in the Stella, Mike’s sentiments ring true for me. There’s no right way to enjoy the outdoors, whether you’re roughing it on a backpacking pad or climbing into a comfortable bed under canvas. For us, the Stella made summer camping easier. I watched my daughter truly fall in love with camping. While Jojo has always enjoyed our previous two-to-five-day camping trips, having a comfortable, stable home base to return to week after week took the novelty out of the act and let her relax into our natural surroundings. It was wonderful to watch her grow into a camper as I grew into a glamper.

The post My Daughter Fell in Love with Camping Through Glamping, and I’m OK with That appeared first on Outside Online.

The World’s 10 Best Beaches, According to Tripadvisor

A Concrete Home Design That’s Skillfully Secluded From The City

A Concrete Home Design That’s Skillfully Secluded From The City