Make 2022 the Year of Maximum Enthusiasm

Note: I first wrote and published this post on December 29, 2011, calling it “Make 2012 The Year Of Maximum Enthusiasm.” Every year around this time, I see a handful of friends re-sharing it, so this year, I’m republishing it, changing nothing but the number “2012” to “2022” and one musical artist name (to keep it more current). I hope you like it whether you’re reading it for the first time this year, or the ninth.

One Saturday morning last October, my friend Greg and I were running down the North Kaibab Trail in the Grand Canyon, close to halfway through 26 miles of trail. We had run 4 miles and would run about 4 more to Phantom Ranch, where we could double-fist coffee and Lemmy lemonade at the cantina before climbing 4,400 vertical feet back up the South Rim to finish a hike/run Rim-to-Rim.

I turned around mid-stride and said,

“We’re running in the Grand Canyon!”

Sometimes I get to do awesome things, and I kind of forget how awesome they are. Do you? I get stressed, caught up in other stuff, and I forget how fortunate I am, how incredible life has turned out to be most days, and some of the special places I’ve gotten to see. Most of the time, though, I try to keep a pretty good handle on it—try to remember to turn around and yell to my friend that yes, we are running across the most famous hole on Earth, and that’s pretty special. Or, you know, even reminding someone a few months later about something special: 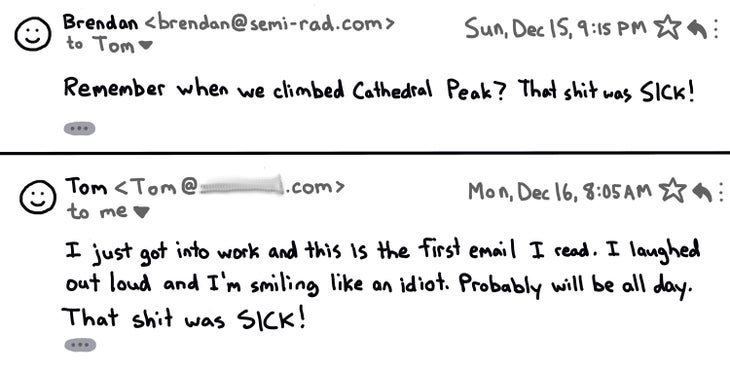 Kurt Vonnegut, in a 2003 speech to students at the University of Wisconsin, said, “I urge you to please notice when you are happy, and exclaim or murmur or think at some point, ‘If this isn’t nice, I don’t know what is.’”

In 2022, I urge you to notice when something is awesome, as it often is, and exclaim or murmur or just make a mental note of it. Isn’t it just goddamn fantastic that you have your health, for example? Or running water, or electricity? Or that you have enough money to actually pay someone else to make you a cup of coffee? Or if you want ice cream, you are at any time in America probably only five or ten minutes away from a place that sells some form of it? (Trust me on that one.)

Your life, even the bad parts, is fucking amazing. And most of the small things that make up your life are amazing, too—mountain bike rides, rock climbs, ski runs, sunsets, stars, friends, people, girlfriends and boyfriends, dogs, songs, movies, jokes, smiles … hell, even that burrito you ate for lunch today was pretty phenomenal, wasn’t it?

What was your enthusiasm for these things last year? I recommend you step it up in 2022.

People can disagree with things like quality, maybe your taste in food, or whether or not a movie is good. But no one can argue with enthusiasm, especially when it is over the top.

Do you think that climb you just did is the greatest climb ever? Great! If someone tries to tell you it isn’t, who cares? “Greatest Rock Climb Ever” is not an objective title. Thusly, when you are excited about a climb (or a trail run or a summit view or a bike ride or a sunrise), don’t let anyone bring you down.

Enthusiasm doesn’t have to stand up to criticism. It doesn’t even have to really make sense. If you finish a ski run, MTB trail or sport climbing route, and you like love it, I encourage you to try out new superlatives when describing it to someone else. This goes for everything you’re excited about. Examples:

Maybe some of the stuff you like love, that you’re passionate about, isn’t cool. Hey, this is 2022. Everything is cool. Irony is either everything, or dead. Be honest: When you see someone wearing a Motley Crue t-shirt, you don’t know if they’re serious, or wearing it to be ironic, do you? Do you like Motley Crue? Then ROCK THAT SHIT. And spread happiness.

Remember it is not illegal to high-five anyone. Do you use exclamation points in the salutations of your e-mails? Well, why not?

Do you like to laugh? Most people do, don’t they? Including baristas, waitstaff, and retail personnel. Perhaps you have at some point had a real conversation with one of these people. This can sometimes begin by sincerely asking those people how they are, instead of treating them like a machine that makes you coffee or orders your salad. This opens the door to making them laugh. If you play your cards right, you may be able to high-five them at the end of a conversation.

You may have already made some New Year’s resolutions, to lose weight, to eat better, to read two books every month, whatever. How about making one more, to be just a little more awesome?

NOTE: The shirt in the drawing is now a real shirt that you can buy and wear if you wish.

The post Make 2022 the Year of Maximum Enthusiasm appeared first on Outside Online.