In 2018, astronomers operating an antenna called EDGES in the Australian outback reported that radio waves of a particular frequency were significantly dimmer than other waves coming from the night sky. The finding, published in Nature, was heralded as a groundbreaking signal from the birth of the first stars after the Big Bang—an event dubbed “cosmic dawn,” which should have stamped such a signature in the light.

What’s more, the dip in the radio spectrum observed by EDGES looked strikingly different than cosmologists had predicted. The data suggested that the early universe was surprisingly cold, triggering much theoretical activity and attempts to confirm the signal by other astronomers around the world.

Recently, one such team, at the Raman Research Institute in Bangalore, India, published the result of its search for the EDGES dip using a radio antenna called SARAS. The astronomers set the antenna afloat on a pair of remote lakes in India in early 2020, cutting their data collection short and returning to Bangalore hours before the first citywide COVID lockdown began. After spending the pandemic analyzing their data, the SARAS team now reports in Nature Astronomy that they found no trace of the dip observed by EDGES.

“It should have been reproduced in their data if it were really on the sky,” said Aaron Parsons, a radio astronomer at the University of California, Berkeley, who wasn’t involved in either experiment. “I don’t see a lot of wiggle room there.”

Judd Bowman, a leader of the EDGES experiment based at Arizona State University, says further work is needed to settle the issue. “We’re excited to see the results from their early observations,” he wrote in an email, adding that “given the difficulty in making these types of observations, there is a substantial process ahead to assess and integrate this new work into the ongoing investigation.”

Hydrogen atoms naturally absorb and emit radio waves with a wavelength of 21 centimeters; it’s these waves that EDGES and SARAS aimed to detect. During their journey to Earth, the waves become stretched by the expansion of the universe. Waves from more distant clouds of hydrogen expand for a longer time and reach Earth with longer wavelengths than waves emitted more recently by closer clouds. The stretching of the light gives astronomers a time-stamped record of events in cosmic history.

Astronomers have used 21-centimeter emission to study nearby galaxies for more than half a century. But more recently, with experiments like EDGES and SARAS, they’ve started measuring longer wavelengths, which are more obscured by terrestrial and galactic radio interference, in search of emissions from hydrogen clouds deeper in the past.

When hydrogen atoms first formed, they absorbed and then emitted ambient 21-centimeter radiation at equal rates, which made the clouds of hydrogen that filled the primordial universe effectively invisible.

Then came cosmic dawn. Ultraviolet radiation from the first stars excited atomic transitions that enabled hydrogen atoms to absorb more 21-centimeter waves than they emitted. Viewed from Earth, this excess absorption would appear as a drop in brightness at a specific radio wavelength marking the moment the stars turned on.

In time, the first stars collapsed into black holes. The hot gas swirling around these black holes generated X-rays that heated hydrogen clouds throughout the universe, increasing the rate of 21-centimeter emissions. We would observe this as an uptick in brightness at a slightly shorter radio wavelength than that of the older light. The net result would be a dip in brightness over a narrow radio wavelength range, like the one detected by EDGES.

But the observed dip, which occurred around a wavelength of 4 meters, was not what theoretical cosmologists had expected: The timing and shape of the trough were off, indicating that the first stars turned on surprisingly early and that X-rays flooded the universe soon afterward. Stranger still, the dip was very pronounced, suggesting that hydrogen in the early universe was colder than theoretical models predicted, possibly because of exotic interactions with the dark matter that fills the cosmos.

Or perhaps the EDGES dip had a more mundane origin.

Hydrogen’s 21-centimeter emissions from the cosmic dawn era reach Earth with wavelengths of several meters, in the range used for FM radio and television broadcasts; that’s why EDGES operated in such a remote location. What’s more, the signal is overwhelmed by radio emissions thousands of times brighter from our own galaxy, and it’s distorted by its passage through the upper layers of the Earth’s atmosphere.

No less important are subtle effects from the antenna itself. A radio antenna’s environment can slightly change the area of the night sky to which it is sensitive. In such a precise experiment, even faint reflections off surfaces tens of meters away can matter. The effect of such reflections would be enhanced at certain radio wavelengths, resulting in a small variation in the antenna’s observing area—and thus potentially in the measured brightness—at different wavelengths.

The EDGES team did see this kind of ripple in their data, and the prime culprits, perhaps fittingly, were the edges of a 30-meter-wide metal screen placed on the ground surrounding the antenna to block radio emissions from the ground itself. The team corrected for possible reflections off of these edges in their analysis, but as some astronomers noted at the time, if the correction was even slightly off, the result could be a dip in background brightness over a narrow wavelength range indistinguishable from a real cosmic dawn signal.

The SARAS team took a different approach to antenna design in pursuit of more uniform sensitivity across all wavelengths. “The entire design philosophy is to preserve that spectral smoothness,” said Saurabh Singh, the lead author on the SARAS paper. The antenna—an aluminum cone propped on a Styrofoam raft—was floated in the middle of a placid lake to ensure there would be no reflections for more than 100 meters in any horizontal direction, which Parsons called “a really cool and innovative approach.” Moreover, the slow speed of light in water reduced the effect of reflections from the lake bottom, and the uniform density of the water  made the environment much easier to model. 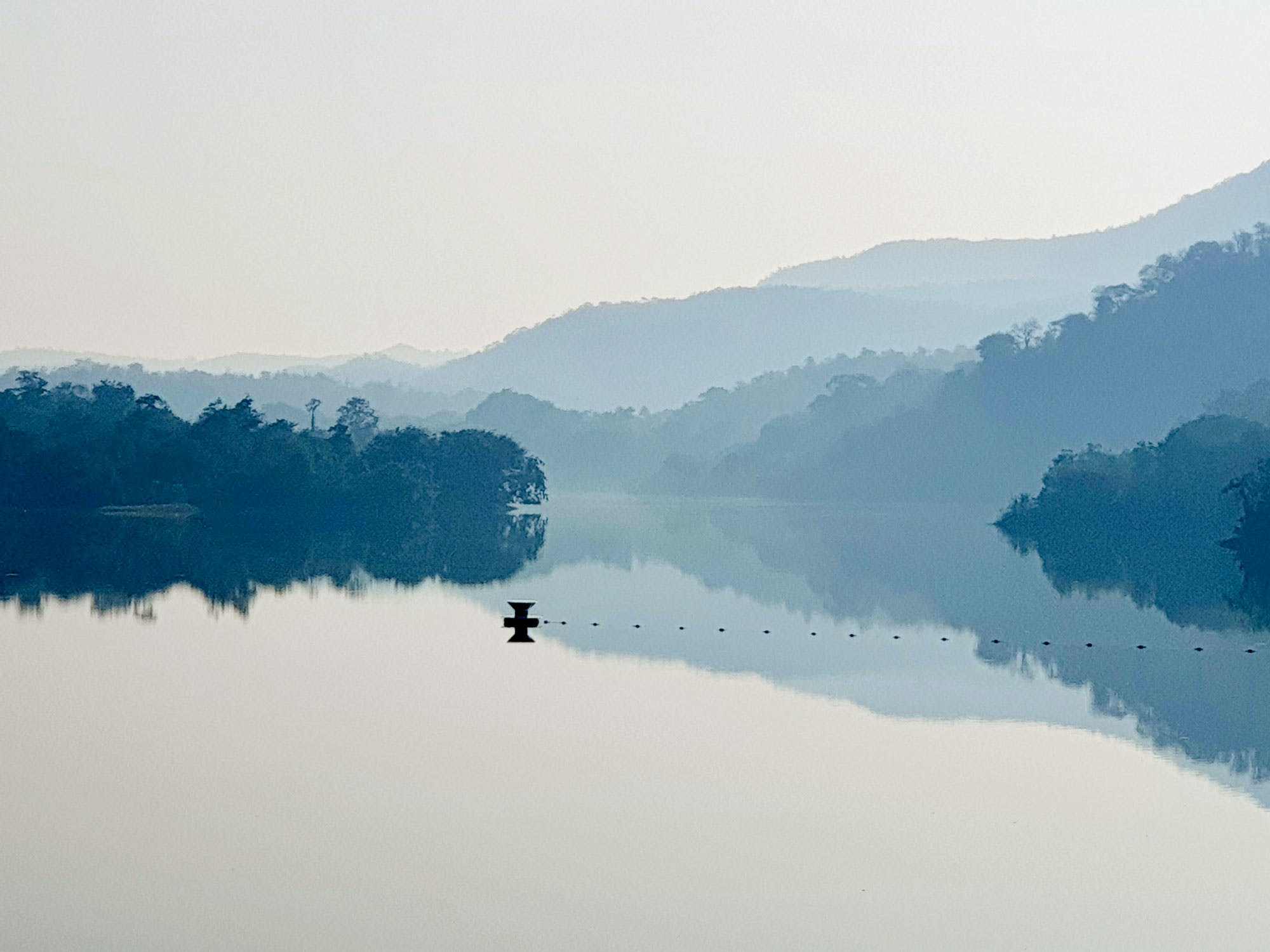 SARAS: The SARAS antenna floated on a pair of lakes in India. LoCo Lab; courtesy of Saurabh Singh

In the end, the SARAS team measured a smooth spectrum around 4-meter wavelengths, with no sign of the deep dip seen by EDGES. (Whether there is any dip at all remains to be determined; Parsons emphasizes that the SARAS team will need to do more work to understand the subtleties of their own measurement.)

H. Cynthia Chiang, a radio astronomer at McGill University in Montreal who wasn’t involved in either experiment, says that both EDGES and SARAS were extremely thorough in their calibration and analysis procedures, and that it’s too soon to say which result is correct. “The level of disagreement is enough to make people uncomfortable, but I think it’s far from the end of the story,” she said. “From my perspective, it adds to the excitement.” She’s leading another follow-up experiment called PRIZM that will operate on a small island 1,000 kilometers off the southern tip of South Africa, where terrestrial radio interference—the main challenge for SARAS—is almost totally absent.

Parsons expects the SARAS null result to hold up. If so, that could mean that the cosmic dawn signal is simply too faint for current instruments to make out. “But I don’t think that should take away from the huge amount of innovation [EDGES] had in pushing this field forward,” he said.

Lead image: Astronomers are looking for a telltale dip in the brightness of radio waves that would mark the universe’s transition from the cosmic dark ages to cosmic dawn. Credit: ESA/Christophe Carreau/Science Source

This article was originally published on the Quanta Abstractions blog.

Cheap flights from Germany to the USA from only €259!

Cheap flights from Germany to the USA from only €259!