British Airways has decided to continue extending member tiers due to the ongoing pandemic that has decimated the business traffic on the airline’s trunk routes between London and North America.

Executive Club previously extended tiers once or twice depending on when yours was set to expire. The latest extension policy applies to those whose Tier Points collection year ends April – June 2022.  It is unclear, at this point, what BA does for those whose status is set to expire in the second half of 2022.

BA has also extended the lower qualification requirement by six months through December 31, 2022.

You can access BA’s page for status extensions here.

Lowered the qualification requirements through December 31, 2022:

Email that BA has sent out: 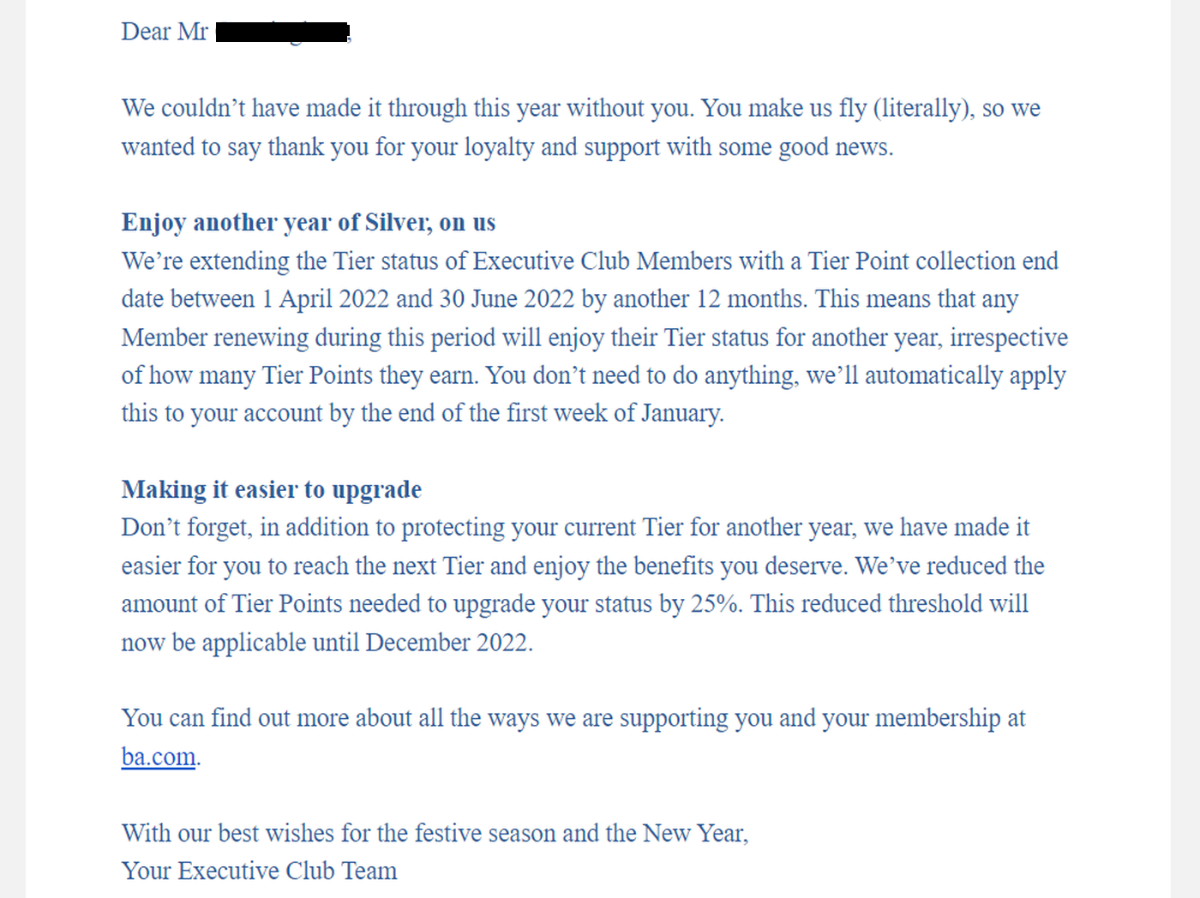 BA has posted the following on its status extension page:

Your loyalty means the world to us. In order for you to have a chance to enjoy the benefits you deserve, whenever you’re ready to return to the skies, we’ve extended the Tier status for Executive Club Members with a Tier Point collection end date between 1 April 2022 and 30 June 2022 by another 12 months, irrespective of how many Tier Points you earn.

This is an extension of the existing membership support where we protected the status of all Executive Club Members with a Tier Point collection end date between 1 July 2020 and 31 March 2022 for another year, irrespective of how many Tier Points they had earned.

In addition, we previously reduced the amount of Tier Points needed to retain or reach each Tier by 25% until June 2022. We have now extended this by another six months, so that the reduced thresholds are now applicable for all Members with a Tier Point collection end date until December 2022.

This means you can benefit from lower Tier Point thresholds, as shown below:

British Airways has been facing significant issues at its Heathrow hub over the past few days. Also, the Omicron covid variant is closing Europe again, making a recovery for BA and airlines in the continent more challenging.

Also, getting through to the airline by phone has been nearly impossible, as I have personally experienced. I had to cancel an award flight, and their online system only has a voucher option for a refund (stupid).

BA still hasn’t further extended Gold upgrade vouchers expiring in early 2022. It is unclear at this point what they will do. Are they extended, or do they just evaporate?