When ordering a meal at a restaurant, taste should be the main concern. Whether you can pronounce the name of the dish shouldn’t factor into your decision, but that’s not always the case. If you’ve ever ordered a salad to avoid saying vichyssoise to your server, it’s time to brush up on your culinary vocabulary. Here are 20 common food names you may be mispronouncing.

Since this super fruit became a trendy ingredient, people have struggled to pronounce it. Instead of ah-KAI, say ah-sah-EE.

Asking for CROO-dites at an upscale event may get you funny looks. Kroo-de-TAY is the correct pronunciation.

Pho is pronounced fuh, as in, “this beef noodle soup is pho-nomenal.”

KEEN-wah is the correct way to say the name of this nutritious, South American staple.

Don’t try to say the name of this famous beef cut in phonetic English. Follow the French pronunciation and say fuh-LAY muhn-YAWN instead.

Saying the name of this potato soup out loud doesn’t have to be nerve-racking. Vichyssoise—pronounced vih-shee-SWAAZ—is actually pretty fun to say.

This French cookie shouldn’t be confused with American macaroons. Say mah-kuh-ROHN if you want to sound like you know what you’re talking about.

The name of this cheesy, Mexican street corn is pronounced eh-LOH-tay.

Even if you know foie gras is pronounced fwah-grah, the name can still trip up non-native French speakers.

Don’t let the zs in the name scare you. You can order this Mediterranean yogurt dip by saying tuh-ZEE-kee.

The name of this condiment is pronounced WOO-stuh-sher. (Now try saying that three times fast.)

Say nee-SWAZ when ordering this French salad to impress your server. 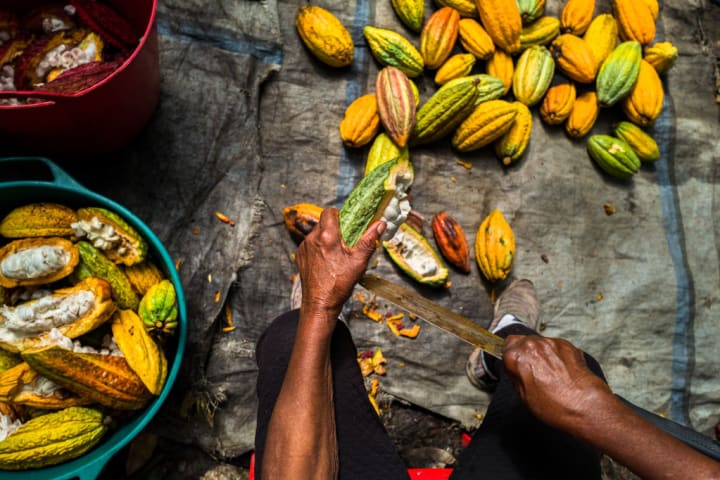 Chocolate production at a Cacao Farm in Colombia. / Jan Sochor/GettyImages

The name of this famous Mexican sauce has two syllables, as in MOH-lay.

This French cheese is pronounced kah-mum-BEHR with a silent t.

The name is spelled differently at various Chinese-American restaurants, but the Tso in General Tso’s chicken is always pronounced tsah-ow.

Ka-soo-LAY is the right way to say the name of this famous French dish.

When in New Orleans, earn respect from the locals and say ben-YAY when ordering the pastry from a coffee shop.

Years after it become the trendiest condiment on the plant, people are still saying sriracha wrong. Sr-AH-chuh is the correct pronunciation.

Champagne makes any occasion feel fancier, especially when you pronounce it the right way: sham-PAYN.