Thanks to Shakespeare (and Petrarch before him), there’s a good chance you’ve heard of sonnets—even if you can’t exactly recall what makes a sonnet a sonnet. The tidy five-seven-five syllable format of a haiku has made it another especially popular type of poem around the world. Clerihews, than-bauks, and these other poetic forms haven’t quite achieved the same level of fame. But that doesn’t mean they’re any less fun.

The clerihew is named for its inventor, English writer Edmund Clerihew Bentley, who remembered penning his first one as a teenager in school during the 1890s. Its subject was Sir Humphry Davy (which Bentley spelled as Humphrey), the early 19th-century chemist credited with discovering sodium and other elements. The inaugural clerihew went like this:

Sir Humphrey Davy
Detested gravy.
He lived in the odium
Of having discovered Sodium.

In some publications, Bentley replaced detested with abominated or was not fond of, which is a good indicator of just how little he cared about meter in these particular poems. In fact, clerihews are often intentionally arrhythmic (and not quite historically accurate) to make them seem more juvenile and therefore funnier.

To qualify as a traditional clerihew, your poem must follow these rules:

In 1951, with the help of editor Naomi Pascal and her husband, classics scholar Paul Pascal, poet Anthony Hecht devised a new type of poem that echoed the brevity and wittiness of clerihews with a little more focus on form. The double dactyl comprises two quatrains with the same meter. The first three lines each have six syllables, with stress on the first and fourth syllables. (A dactyl is a group of three syllables where the first is stressed, and the second two are unstressed. So each of these lines is technically a double dactyl, hence the name of this type of poem.) The last line of each stanza only includes the first four syllables of a double dactyl, so: one stressed, then two unstressed, then one stressed.

Double dactyl poems have a few other requirements, too:

Higgledy-piggledy
Theodore Roosevelt
Loved to sling barbs he dreamed
Up on his own.

Taft he called “flubdub” most
Enthusiastically
Bryan he labeled a
“Human trombone.”

The Fibonacci sequence is a number pattern in which the next number is the sum of the two previous numbers. It starts with 0 and continues as follows: 1, 1, 2, 3, 5, 8, 13, 21, and so forth. In a Fibonacci poem, that progression is applied to the number of syllables in each line. The first two lines have one syllable each; the third line has two syllables (one plus one); the fourth line has three syllables (one plus two); and so on. It typically stops after you get to eight syllables, for a total of 20 syllables split up over six lines.

As Deborah Haar Clark wrote for the Poetry Foundation, people have been experimenting with Fibonacci poetry for centuries. But the current six-line, 20-syllable iteration was made popular by writer Gregory K. Pincus, who published one on his blog in 2006. His “Fib,” as he nicknamed it, went viral, and people have been making their own Fibs ever since.

The American cinquain is a particular type of five-line poem originated by Adelaide Crapsey, whose own cinquains weren’t published until after her death in 1914. The first line has two syllables, the second line has four, the third line has six, and the fourth line has eight; the fifth line, however, is back to two. In each line, half the syllables are stressed. Crapsey usually ordered hers in iambic meter, where the stress falls on every second syllable. Here’s her cinquain “The Warning,” written sometime between 1911 and 1913:

Just now,
Out of the strange
Still dusk … as strange, as still …
A white moth flew. Why am I grown
So cold?

A tanka, meaning “short poem,” is a centuries-old Japanese form comprising 31 syllables in total. Those syllables typically used to be written on a single line, but today’s English tankas—and English translations of Japanese tankas—are traditionally split into five lines with this syllable count: five, seven, five, seven, seven. While tankas don’t usually rhyme and don’t have a specified meter, there are loose guidelines about subject matter. The upper three lines, known as kami-no-ku, often start out describing something concrete and, on the third line, shift toward the metaphorical. This more figurative concept is fleshed out over the last two lines, called shimo-no-ku.

Below is the second stanza of Sadakichi Hartmann’s six-tanka poem, titled simply “Tanka” and published in his 1904 collection Drifting Flowers of the Sea and Other Poems.

Ah, were the white waves,
Far on the shimmering sea,
That the moon shine laves,
Dream flowers drifting to me –
I would cull them, love, for thee. 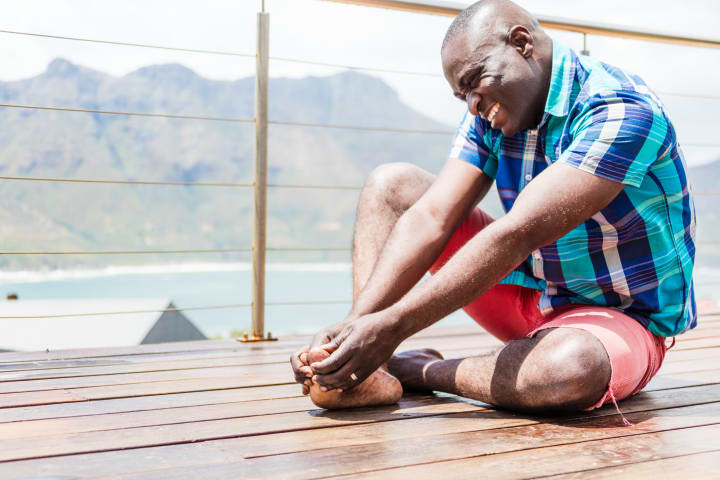 Channel the pain into poetry. / Jan-Otto/iStock via Getty Images

I stubbed my toe
On the low curb.
Oh no, it hurts.

The triolet, from an old French term for clover leaf, is so named because its first line appears a total of three times throughout the poem: You repeat it for the fourth and seventh lines. The second line is repeated for the eighth line. The third and fifth lines rhyme with the first line; and the sixth line rhymes with the second. Triolets are thought to have originated in medieval France, and the form later enjoyed periods of popularity in Germany and the UK. Thomas Hardy’s “How Great My Grief” is an especially notable English example:

Rhyme, theme, and meter don’t matter in a nonet—but length and syllable count do. Every nonet has exactly nine lines: The first contains nine syllables, and that number decreases by one for every line thereafter. So the second line has eight syllables, the third line has seven, and so forth until you reach the single-syllable ninth line. Here’s one that illustrates the concept:

A nonet’s first line comprises nine
Its second line only has eight
The third line contains seven
The fourth line has six, and
Then five for the fifth
Four for the sixth
Seventh? Three
Eighth? Two
One

“The Golden Shovel” birthed its own poetic form, known simply as a “golden shovel,” which follows Hayes’s original structure. While some poets have written golden shovels based on other Brooks poems, you’re free to model yours on the work of your own favorite poet.

Known as an “elevenie” in English, the German elfchen (which loosely translates to “little eleven” or “wee eleven”) contains 11 words separated into five lines: one word, then two, then three, then four, then one again. The first line of an elfchen is traditionally some single-word concept, thought, or thing, which the rest of the poem describes—what it does, how it looks, how it makes you feel, whatever strikes your fancy. The last line is often a synonym or some other overarching reflection of your first word.

If you learned how to write elevenies during your early school years, you might remember your teacher giving you more specific rules; e.g. maybe the first word had to be a noun, and the second line could only contain adjectives. But out in the wild, those details are up to you. Here’s an elfchen in honor of those tireless educators:

The word monostich is believed to derive from an ancient Greek word that literally means “one verse” or “one line.” Though it can refer to a one-line verse in a larger poem, a monostich can also be a whole poem that only contains one line. So if the syllable stresses of double dactyls and the rhyming repetition of triolets require a little too much wordplay for your taste, feel free to just write “This is a poem” and call it a day. That’s a monostich.

Cheap non-stop flights from Chicago to Lisbon, Portugal from only $395!

Cheap non-stop flights from Chicago to Lisbon, Portugal from only $395!